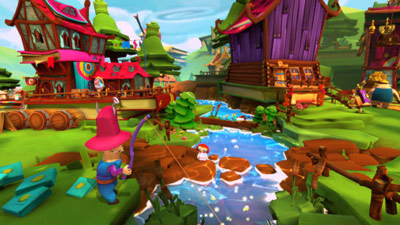 Taking the fairy tale world and turning it on its head, Fairytale Fights for the Xbox 360 and PS3 offers an extraordinary and bloody version of a Kingdom Far Far Away. Players can control their favourite character from fairytale history you must hack and slash their way through the Kingdom to complete various quests in this rip-roaring platforming adventure. With over hundred weapons and various bloodthirsty tactics to reclaim fame and fortune, Fairytale fights will change the way you look at fairytales forever.

If there's one aspect of Fairytale Fights that will grab you from the start it's the simple bloodthirsty and gory nature of the game. This is definitely not for children. The game takes some familiar fairytale characters like Red Riding Hood and Snow White and runs in the ultra-bloody, hack and slash direction that would make even the Brothers Grimm blush and grimace.

The story that enables all this shocking hilarity focuses on restoring these fairytale heroes to their rightful places after the Little Tinker steals their fame. Each of the levels sees you exacting revenge on the ghoulish monsters that have replaced the particular character in their world. But the story is mostly there just to keep the game ticking over. What keeps you coming back for more is the platforming and the excessive violence.

There are about 140 different weapons in the game. Each encounter with any enemies, no matter who or what they are, results in large amounts of blood staining the vibrantly coloured world. The killing techniques resulting from the variety of ranged or melee weapons is pure entertainment which makes the game so utterly fun - in guilty Mortal Kombat kind of way.

Despite its obvious dark nature the game still retains a charm and lightheartedness which keeps these relentless mechanics from overpowering the gameplay. The platforming sections are satisfying and some of the later levels incorporate some pretty neat ideas that keep your interest between the fighting. One section that stands out is the Jack and the Beanstalk area. Here, you're in the giant's kitchen as the giantess is preparing a meal, scurrying around the kitchen in between various ingredients and condiments. What makes it cool is how the giantess will occasionally reach towards the screen, plucking out a huge object and change the way you'll tackle the level.

This approach keeps Fairytale Fights fresh and satisfying to play. The concept of taking classic fairytale characters and letting them run wild in a sociopathic way is compelling enough, but when you work in some decent platforming action as well then it becomes a winner.

Adding to the fun is the inclusion of four-player co-op. This is enabled in both the story mode and in the multiplayer modes which consist of many player vs player battle grounds. But going through the story mode with three other friends is undoubtedly the highlight, bringing back memories of Castle Crashers or even the Lego Star Wars games with its drop-in drop-out co-op play.

If there's one aspect of fairytales that I've noticed since growing up, it's that they are dark and disturbing affairs. Read any original Brothers Grimm tale and the dark undertones are there to see - Fairytale Fights does a great job of over-blowing this side of them with its shocking display of cartoon gore and violence. As graphic as this violence is I couldn't help but find it frequently hilarious and entertaining. Getting a friend to play in co-op and intentionally or unintentionally slicing a limb or two off each other made for some fantastic gaming sessions.

Fairytale Fights for the Xbox 360 and PS3 presents might put the emphasis on over-the-top gore and relentless violence but it's a fantastic action platformer that's ridiculously entertaining. Using familiar fairytale characters and a wonderfully detailed world, this is an experience that's as fun to play as its setting is hilariously memorable.

You can support Jan by buying Fairytale Fights