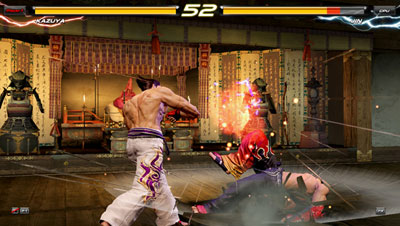 Packing HD graphics running at a blistering sixty frames per second, there's never been a fighting game that looks as good. Taking on even the cartoon styling of Street Fighter 4, Tekken 6 on 360 and PS3 hits the ground running with a whole host of new features, including an updated storyline, ground breaking online modes. These join the headlining dynamic, destructible environments and unrivalled character customisation system to make this a tour de force of versus fighting. Like the characters themselves, this Xbox 360 and PlayStation 3 title is something to be reckoned with.

As one of the longest running beat 'em up franchises in the world, Tekken 6 had a lot to live up to; but once you get into it, it surpasses all expectations. Combining the original Japanese arcade game of the same name, with the additional characters from the pseudo expansion, Bloodline Rebellion, and some updated visuals and mechanics for a western audience, Tekken 6 is a fantastically well rounded package.

Updating the combat system with a few new features was one of the more interesting game play additions with this 360 title, bringing both the bound, and rage systems to the table. The first one allows for bigger combos to be dealt out, as when a player is slammed to the ground, or falls from a ledge on a multi-tiered stage, that character will bounce up off the floor, just enough to allow a flurry of blows to continue the assault. The latter feature is activated when a player has reduced vitality, and is indicated with a red glow around the player's health bar. The best part of this feature is that its effects are purely up to the player, and are completely variable depending on your preference in the customisation mode.

This feature has seen much improvement with enhanced item and character customisation making your choice of fighter feel much more unique to you, and not just an off the shelf clone. Still, there is a wide array of characters to choose from, with traditional ones like the Mishimas and Anna making their return with similar game play style, and others like Law and Yoshimitsu making an appearance, but with revamped move sets.

Some newer characters players may not be so familiar with also grace the Tekken scene for the first time. Bob, the gut sporting, upper cutting behemoth is sure to please a lot of players with his hard to interpret play style, while Leo is likely to draw fans with his impressive combo damage. Miguel, Zafina and Azazel make up the roster of new faces.

Levels have also seen a nice revamp in Tekken 6, with their size being vastly increased making for fights taking place in wider spaces, and taller buildings. These facets come in to play, as with the environment being largely destructible, you can now throw your opponent through walls, smash them through floors and even continue your giant air/ground combo once they hit whatever's on the other side of the piece of scenery you sent them crashing through.

While a lot of fighting games could be said to be somewhat button bashers due to their frantic pace, I always enjoyed the slower, more tactical game play of the Tekken franchise. One advantage of this is that you can really experience the visuals and Tekken 6's HD textures are a real treat. Along with the incredibly fluid animations, this game is a true feast for the eyes. Tekken 6 is a beautiful game, and with the physics additions, thanks to the rubbles that go flying every time a combatant is hurled through something, I'd be impressed if there was a better looking fighting title out there at the moment.

When it comes to Wrestling, there really is only one game franchise that should be considered, WWE Smackdown vs Raw, and the latest version of it is no different. Packing customisation features to the hilt, a tweaked graphical engine offering the best wrestling visuals seen in a game to date; there is no reason not to pick up this title. For wrestling fans, it really doesn't get any better than this.

You can support Jan by buying Tekken 6