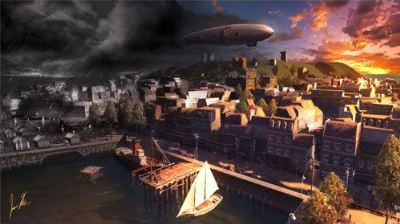 Using World War 2 as a backdrop to its story rather than the focus, The Saboteur for the Xbox 360, PS3 and PC tells a personal tale of revenge against the Nazi war machine that shows the World War 2 setting still has the capability for telling dramatic and moving stories. Putting players in control of Sean Devlin, an Irish race car driver who joins the Special Operations Executive, you'll be conducting a guerrilla campaign against the occupying Nazi troops in Paris. With an open-world third person presentation, this is a very different World War 2 game that mixes elements of Mercenaries 2 and Okami for a subtle and atmospheric experience.

The Saboteur sets itself apart from the usual World War 2 games by taking a different approach to both its setting and the story it tells. Rather than sticking to a first-person shooter model, the game pulls the camera back to favour a third-person viewpoint similar to that of Grand Theft Auto or more specifically Mercenaries 2, the developer’s previous game. This approach enables The Saboteur to offer a much wider range of gameplay mechanics than just shooting Nazi's and blowing up stuff.

Playing as Sean Devlin, an Irish race car driver who suffers a personal tragedy at the hands of a high-ranking German officer, the game has you fleeing to Paris under German occupation as you decide to take revenge for your loss. From this point on the game begins the real journey of The Saboteur and this leads to your involvement with the British Special Operations Executive as you start to wreak havoc on the German war-machine.

The interesting aspect to The Saboteur is how open the game is and the different ways you can approach your objectives - there’s the option to use disguises and stealth tactics to sneak in undercover or you can opt to go guns blazing and complete your mission that way. Usually this range of options means one of the mechanics is less-developed than the other, but The Saboteur has nailed down the gameplay for both the stealth and action options you can take.

This makes The Saboteur a much more involving title, you'll get a lot of enjoyment out of taking the time to stealthy assault a German position and get into a facility to blow it up without anyone noticing you were there. There's also a bit more variety on offer with the mission types as well. As well as having a lot of basic sabotage objectives, the side-missions take advantage of your characters racing past with a lot of driving-based sections - some with combat gameplay as well.

It's clear that the game is built on the structure of Mercenaries 2. But where that game had some questionable controls and dated graphics, The Saboteur fixes all these problems and in the case of the visuals, pushes them into some impressive territory with the transition from black-and-white to colour.

This transition occurs within the game when you move from an occupied part of Paris to areas where the resistance have a greater influence. The way this 'Will to Fight' is shown in such a visual way lends The Saboteur a great artistic style that's enormously effective in conveying the occupation and its effect on the city. It's similar to Okami and you'll find yourself painting back the colour to the Parisian cityscape through your actions and loosening the grip of the Nazi's at the same time.

If there's one aspect that makes the game shine more than any other then it’s the depiction of Paris. It's by no means an authentic, to-scale model of the famous city but it succeeds in carrying the essence of the French Capital with some amazing attention to detail. The ability to climb many of the famous monuments including the Eiffel Tower is an impressive feat but it would mean nothing if the atmosphere of the other parts of the game and their locations weren't up to the same standard.

But that same level of atmosphere is matched and exceeded in many places, with various scenarios playing out in famous or dramatic parts of the city. The famous Paris catacombs act as a resistance hideout and one of the early missions has you creeping through the Pere Lachaise Cemetary - a very creepy place thanks to the impressive visuals and made all the more intense due to the German troops patrolling the area I was trying to avoid.

This level of detail and the wider feeling of being able to approach objectives in a variety of ways make The Saboteur one of the most interesting World War 2 games to come out in recent years. Eschewing the usual FPS genre for an open-world environment was an ingenious move and The Saboteur for the Xbox 360, PS3 and PC is filled with genuinely memorable moments that live long in the memory.

You can support Jan by buying The Saboteur