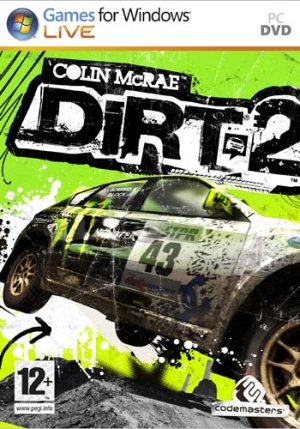 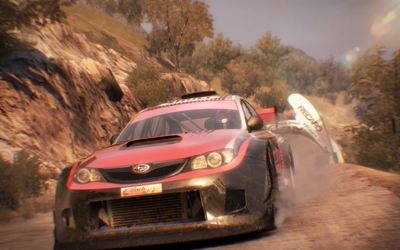 Exploring the various disciplines of off-road racing, Colin McRae Dirt 2 for the PC is the ultimate racing game for those you love their adrenaline-filled extreme off-road events. Taking place in stunning real world locations and including some exhilarating racing events, Dirt 2 redefines the racing for modern PCs. Taking full advantage of the new DirectX 11 feature set, this is a game that will show off the latest hardware and provide a cutting-edge visual experience unlike any other.

Colin McRae's Dirt 2 isn't anything like the traditional rally racing game some of us have grown up with and loved. The original Dirt was already showing signs of fantasy with its V8 uphill truck races and paint-stripping, car-bashing events that resembled Flatout: Ultimate Carnage more than a true simulation. Dirt 2 goes full-on with the fantastical world the original started and gives you a gasp-inducing racing experience that all fans of off-road racing really want it to be.

Starting you off in a beat-up RV, the world tour career mode takes you on a truly spectacular journey to some of the most iconic racing locations from around the globe. Not only iconic but also utterly beautiful in looks and how it presents the sense of speed when motoring along a track. This game and Need for Speed Shift are great examples of how to portray the feeling of travelling fast. But where the wider visuals of Dirt 2 on the consoles looked good, the effects on the PC with the new DirectX 11 features are breathtaking. This is a game to show off what PC visual are capable of against the wider console market with its attention to detail and impressive lighting effects.

The racing itself handles brilliantly and is a perfect mix of arcade accessibility with certain simulation elements. The handling has been improved from the first game and it’s good to know that you don't have to get under the hood of every car you come across to get the best performance out of it. It's the sense of weight that Dirt 2 gets right this time with the cars feeling like real physical objects rather than disembodied chassis’s and wheels like the first game.

Your rivals and racing cohorts are what make or break the game depending on your tolerance for 'extreme sports stars'. In truth, I found these obnoxious young upstarts incredibly irritating and they took away a large amount of the atmosphere the game had built up for me. The way they refer to me by name, thanks to the same naming system found in Grid, is pretty neat but no matter how personalised the experience was, it was still full of irritating personalities. The only good aspect to come from this is how much I wanted to beat them in the world tour races. Any chance to wash the smug attitude off their faces was a welcome opportunity and this at least created rivalries that otherwise wouldn't have been there.

In all honesty I was concerned that my love for authentic rally racers would colour my view of Dirt 2 with its extreme sports makeover. But I was pleasantly surprised after finishing the game that I hadn't missed charging through the Welsh forest on a point-to-point as much as I thought. The variety of modes and race styles meant I was constantly challenged by the cars and tracks, all the while having a lot of fun in some spectacular locations and settings. I got the feeling that the design team enjoyed being unshackled from the strict rally setting of previous games and just let their imagination go wild.

It might not be anywhere near as authentic as the previous Colin McRae Dirt, but Dirt 2 for the PC is a tremendous racing experience that takes the off-road premise and gives it a beautiful and spectacular coat of visual and design paint. The varied locations and the excellent handling mean this is one of the best racing games available and you won't find a better or more beautiful game on the PC today.

You can support Jan by buying Colin McRae: Dirt 2