Ratchet and Clank: A Crack in Time PS3 Guide

Ratchet and Clank: A Crack in Time PS3 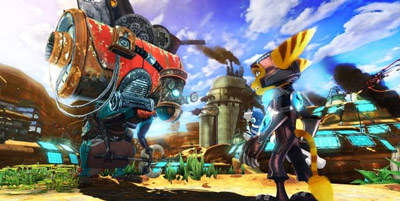 The latest instalment in the best-selling series, Ratchet and Clank: A Crack in Time on PS3 puts you back in the shoes of both Ratchet and Clank as they battle to save the Universe from the dastardly Dr. Nefarious. With the duo separated and working to reunite with each other, you'll get to use new gadgets such as Ratchet's Hover-boots and Clank's abilities to manipulate time itself. With the same stylish presentation and fantastic platforming, A Crack in Time continues the series excellent traditions with colourful environments and spectacular gameplay wrapped up in a cracking storyline.

This feature-length sequel Ratchet and Clank for the PlayStation 3 concludes the events started in Tools of Destruction and Quest for Booty. Both characters start off separated from each other as per the events in Quest for Booty, but that doesn't stop Ratchet from picking up a new sidekick in the form of General Azimuth. This introduction of an older 'Obi-Wan Kenobi' figure is a great touch and keeps that whole 'Ratchet with a side-kick' vibe going throughout this new game.

This new character joining the team adds more depth to proceedings and it's clear that the cinematic style and storytelling nuances have been taken to a new dimension. There's much more heart to this Ratchet game than with Tools of Destruction. Combine this with its Pixar equalling cut-scenes and a new layer of emotion and quality fills the gaming air.

But Ratchet and Clank games have always been about the gameplay. The Crack in Time release on PS3 excels in retaining the best parts of the previous games but also adding a few tweaks and upgrades. Visually it looks stunning with both the cut-scenes and in-game action better than ever, with some impressive and stylised weapon effects capping off the whole experience. Around every corner there are crates to smash or bullets to pickup and more enemies than ever to dispatch of in creatively violent ways.

Those aforementioned ways are, of course, down to the ever-changed arsenal of weapons at your disposal. A Crack in Time boasts fifteen new additions to the arsenal with some typically overblown and extraordinary guns to power-up and blast the bad guys away with. The most awesome of these is the Sonic Disrupter - which looks like an ordinary gun with a big frog stuck onto the end. Firing this sends objects and enemies flying away with the force of sonic boom - a simple yet immensely satisfying way to blast enemies off platforms or give yourself room to breath in the hectic battles of the game.

The new gadgets also add a ton of gameplay to A Crack in Time, with Ratchet's Hover-boots acting as an impressive replacement for Clank's propeller. This allows you to glide around the levels with ease, which is just as well as they're a lot bigger than any previous levels in a Ratchet and Clank game. Using these boots isn't just an awesome way to traverse the game, it also shows off the impressive environments and the attention to detail A Crack in Time has been given.

But Ratchet is just half of the game and I've always been a Clank man. So for me controlling Clank and his powerful new abilities was where things really started to sing. The big novelty here is his ability to manipulate time. Although I found Clank's sections a lot less hectic than those with Ratchet, I really appreciated the change of pace. These levels are much more puzzle-orientated and lead to some interesting platforming mechanics with the ability to record and replay up to four separate instances of Clank in the world. It sounds complex but once you've mastered the use of manipulating time so you can be in literally four different places at once, these sections become second nature and immensely fun to play. Imagine a third-person Portal game and you're halfway there to understanding this new ability.

Ratchet and Clank: A Crack in Time doesn't bring the series into groundbreaking new territory - but that's because it doesn't need to. Keeping with the winning formula and adding a few extra weapons and some interesting time mechanics to Clank's adventuring parts, A Crack in Time for the PlayStation 3 is an excellent addition to this beloved series. With its gorgeous visuals and fun gameplay this is just the type of game that'll put a smile on your face and spring in your step.

You can support Jan by buying Ratchet and Clank: A Crack in Time