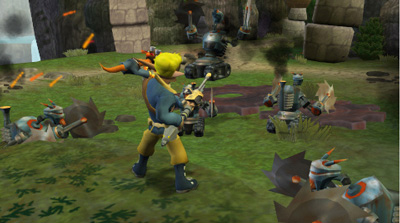 Back together for the first time on PSP, Jak and Daxter: The Lost Frontier takes the series to new heights as the duo battle space pirates and head into the clouds to stop their planet from destruction. Offering a new PlayStation Portable twist on the traditional platforming style of the past, The Lost Frontier mixes the usual running and jumping mechanics with some excellent new air combat sections that will have you blasting down Pirate cruisers and upgrading a variety of stunning fighters.

Picking up the action where the previous console series left off, Jak and Daxter: The Lost Frontier marks the first time the series has come to the PSP and the game comes with some intriguing changes. Most of the action is still platforming-based but the new addition to the gameplay is the aerial combat that sees you battling Sky Pirates in customisable aircraft or using the Gunstaff weapon to blast Aeropeans off the map.

This change from pure platformer to an all-round action adventure gives the game a lot more depth than you might expect with the reappearance of the series on PSP. The story pushes the stakes even higher when you learn that Jak and Daxter's world is on the brink of destruction due to Eco shortages. This new direction gives the game a lot more freedom to show new locations and even introduces new characters.

The traditional platforming is what you'd expect from a good Jak title - there's combat and puzzle-solving to be done in order to progress - with some epic and large combat areas to get your teeth into from time to time. In addition to the usual running and jumping, Daxter also gets some interesting Eco powers to help him on his way - teleportation, platform building and explosive energy all help to combat enemies or assist in the myriad of puzzles you'll face along the way.

In-between the platforming parts comes the new aerial combat sections and this helps to push the game forward and keep the experience fresh. They also happen to be pretty awesome as well. You start off with one ship and can work your way towards four additional vehicles, all offering weapon and mobility modifications and each having an individual look and feel. If you put all the air combat together it would probably make up half of the game and it feels like it could offer an entire gaming experience on its own. It’s easy to see why it was made such an integral part of the game.

Some of the situations that you battle in are marvelous set-pieces as well. One mission involves flying over a mountain range and trying to take out a massive enemy Pirate cruiser. With its propellers and gun-stations there were a multitude of targets I could lock onto and destroy whilst enemy fighters flew all around me. Pressing a certain button then enabled a big targeting reticule that would allow Daxter to jump from Jak's fighter to an enemy fighter. This suddenly moved the camera close-up and I could see Daxter dismantling the plane and enter me into a mini-game that led ultimately to the enemy plane being completely destroyed. The experience of jumping from plane to plane in order to reduce the enemy fighter count and also to retrieve parts for Jak's own fighter, is easily the best in the game and one of the most entertaining sections of gameplay I've had on the PSP.

Taking the series onto the PSP rather than give it a full HD PS3 version was always to need justifying, but Jak and Daxter: The Lost Frontier is an amazing title that further the series in a new and exciting way. The platforming sections are comfortably familiar and satisfying whilst the new aerial combat parts are simply the best part of the game - something I wasn't expecting from a Jak and Daxter title. If you love the series or simply want a platformer on the PlayStation Portable that does something new then Jak and Daxter: The Lost Frontier is the title of choice.

You can support Jan by buying Jak and Daxter: The Lost Frontier