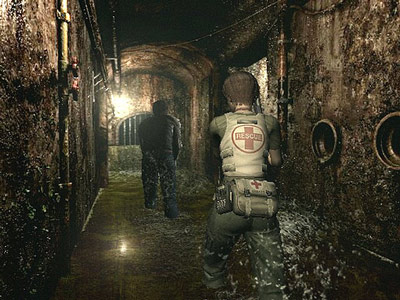 Serving as a prequel to the original Resident Evil game, Resident Evil Zero for the Nintendo Wii covers the ordeals of Rebecca Chambers as she investigates a series of grisly murders in Raccoon City. This new Wii version replicates the original Gamecube game but adds the immersive Wii controls whilst still offering players the chance to grab the Classic or Gamecube controller for the authentic experience. Resident Evil Zero reveals how the terrible events of the franchise begun and is a must for any fans of the series.

One of the unique aspects of the Resident Evil Zero for the Wii is the 'partner zapping' system. This enables you to play as both characters, Rebecca Chambers and Billy Coen, throughout the game. You can either splitting off at certain points or journeying together with the computer controlling the other character.

This leads to some interesting video game moments as Rebecca controls very differently to Billy. Rebecca can acquire chemicals as she's a medic and mix up potions to heal both characters. She can also squeeze into tight spaces but has less health and can't sustain much damage. Billy on the other hand being an escaped convict is bigger and tougher, able to handle heavy objects and take more damage.

But none of these interesting videogame antics would mean anything if it wasn't for the atmosphere. The PS2, PS3 and 360 Resident Evil games have always given a tense and involving experience and Resident Evil Zero continues that great tradition with some dread-dripping moments. Making progress and staying alive is incredibly satisfying, as are solving the puzzles that are spread throughout the game. The cut-scenes push the story on and tie everything together quite well and considering this is quite an old game, the graphics still hold up.

It's also quite a difficult game if you push the settings to the max. Instead of making the game irritating, harder settings add more tension to the experience and surviving each stretch of corridor becomes quite a challenge. There's also a lot of atmosphere tied up with the locations that you play in. From the starting train area, to the mountains and secret underground base, Resident Evil Zero lays on some creepy environments and memorable locations.

Resident Evil Zero also fills in the details about Umbrella Corp. and STARS prior to the events of the first Resident Evil outing. This is excellent for any fans of the series and gives the whole franchise a sense of history and depth that's hard not to find eerie and compelling. This is what I found so great about the game - the chance to find out where the T-virus all began and how the franchise got started was such an awesome concept. Although the Gamecube version has been out for many years - with great reviews - there are many people, like myself, who didn't grow up with the series and this opportunity to rediscover the beginnings was incredible.

Resident Evil Zero for Wii is a great prequel to a great series and if you've got any interest in the Resident Evil universe then Zero will be well worth buying. It might be a port of an older Gamecube game but it's not lost any of its atmosphere and satisfying gameplay. Here is a purchase that's still got the thrills and chills that the series is famous for and this version on the Wii will give every newcomer or veteran an excellent experience.

You can support Jan by buying Resident Evil Zero