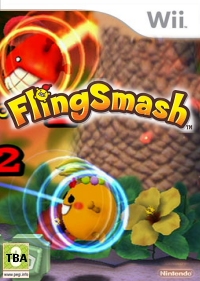 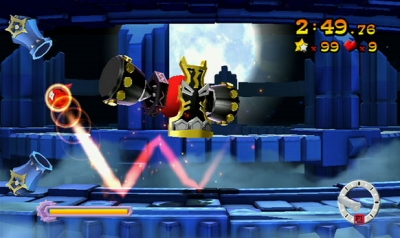 FlingSmash may confound hardcore gamers, but for my family it worked great. Simple controls, a free Wii-mote, and bright visuals were more than enough to overcome the fiddly aiming and annoying bosses.

Although I like quite a few Wii game, my husband maintains that I'm not a real gamer because most of these are exercise or educational titles. I guess it is true that I usually have an ulterior motive for setting the Wii up, nothing wrong in that though.

FlingSmash was the first Wii game I've played in a long time simply because it was fun. The controls are super simple because it uses the MotionPlus controller to know where you are pointing. I never seemed to get on with the "old-style" pointing where you have to aim at the sensor bar, but with the new controls are much easier.

You use these to flick a little ball around the screen. At first this seems pretty random, but as you start to learn about the different blocks you can bash and enemies you can hit there is quite a bit of skill involved.

It all looks bright and friendly and there are no-end of things to collect, unlock and powerup your little ball. Hit him at the right moment and he can bash through a whole series of blocks in a row.

In each level your main task is to get to the end collecting points, but to really complete it you need to collect three silver coins hidden in each world. I got a bit addicted to this and refused to move onto the next level before we had completed the last one by collecting all three coins.

Because of the simple controls all our kids (3, 5 and 7) can play no problem.

I'm not exactly sure what it is about FlingSmash that makes it so much fun. Playing with the family - because of the simple controls all our kids (3, 5 and 7) can play no problem - is good fun, and it's great to share with friends that come round.

The thing that hooked me in the most though was that there just seemed to be so much to do. I'd get one part of the game down, only to discover a new way to chain together my bashes to earn more points, or another power-up to collect. It all reminded me of watching by brothers play Rainbow Islands when I was younger (and Rainbow Islands: Towering Adventure more recently). What looked very simple actually had layer upon layer of complexity to it.

Maybe because of that FlingSmash feels like a platform game to me - although I know Wikipedia class it as an Action game. I think maybe it's a totally new type of game altogether which is maybe why people aren't sure what to make of it.

Perhaps the best thing about FlingSmash is that it comes with the new MotionPlus controller.

It's not all plain sailing though. There is a good 20 minute introduction that you have to watch before playing - why can I not skip this, I paid for the game already! The controls are also a little fiddly at times, you have to keep a close eye on the direction meter in the bottom right for accurate shots.

Also there are big enemies to kill at the end of each world. While these are a nice change to the action, they are often too tricky to kill and rely on very accurate direction control from the player. I found this quite frustrating and was much happier when I had dispatched them and could return to the main game.

Perhaps the best thing about FlingSmash is that it comes with the new MotionPlus controller. Or perhaps it's the other way around? This is the Wii-mote that includes the MotionPlus block in the main unit. The main effect here, apart from looking neater, is to reduce the size of the peripheral.

This may sound like a small thing if you have big hands, but for my son (5) we had to keep unplugging the MotionPlus block so he could reach the 2 button when playing Mario Kart. Now we don't have to do that anymore.

FlingSmash was great family fun, and simple to play.

FlingSmash was great family fun, and simple to play. The colourful world it creates and the many ways to increase you score more than made up for any struggle with the controls. And what's more my husband has to agree that this really is a proper game. Maybe I'll be welcomed into the ranks of other gamers now.

You can support Josie by buying FlingSmash