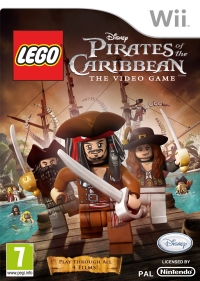 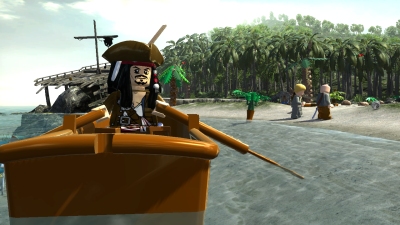 Lego Pirates of the Caribbean Wii is a surprisingly good retelling of all four films. Legoisation is not only cute, but helped me enjoy and understand these games that my kids pour hours into.

I'll admit that I'm a bit of a Pirates fan, not the old fashioned eye-patch wearing grogg swilling kind I hope you understand, it's more the Johnny Depp, Orlando Bloom modern day rock and roll pirate for me.

But even so, after the inability of the last two Pirates of the Caribbean films to live up to the original, I wasn't all that excited about On Stranger Tides. So noticing that a new videogame had magically materialised (the powers of a geeky husband never cease to amaze) on our coffee table for said franchise, I made my excuses and left the boys to it.

As far as I could tell from an my passing inspection, this is like the other Lego games they play on the Wii, expect of course this one has a Pirates of the Caribbean theme. It was instantly their game of the moment, not least I think because they could play together at the same time -- but also choose to go where they wanted with a clever split screen that popped up if they got separated.

What caught my eye though, was how lifelike the little Lego incantations of each Pirates' character were. Not just how they looked but also how they moved and what they were wearing. The game has Johnny Depp's, or should I say Jack Sparrow's, swagger down to a tea and Orlando Bloom's slightly grating fresh faced innocence captured perfectly. I realised this after I caught myself standing in the doorway watching the boys play, during what was supposed to be a trip out to grab some herbs from the garden for tea.

The game has Johnny Depp's swagger down to a tea.

Later that evening I casually suggested that my other half and I try out the game, you know, to make sure it was appropriate for the kids to play. It didn't take much persuading to get him playing (well, none actually) and we were soon working our way through the first film.

The way it works, apparently like on all the other Lego games, is that you get a few minutes from the film recreated in Lego to set the scene then you take control of a little band of characters. Each one can run, jump, hit and shoot as well as some special abilities.

I found Jack Sparrow's compass to be one of the most useful things in the game - this lets you choose one of the tasks you haven't already completed and then paints a trail of footsteps to where you need to go to solve it.

Once you have solved all the problems in one area and fought all the bad guys (although here that translates to members of the Royal Navy) you move onto the next location and get some more of the story in Lego form.

If you like the films it works well and actually it reminded me of a few parts of the story I had forgotten about. The game works through all three of the old movies plus the new one. It seemed like good value to me, when they could have stung it out into three of four games.

I can dip in and help the kids if they get stuck.

By the end of an evening's play I'd had a good time, and I must say solved more than my fair share of puzzles -- much to my other half's surprise. I'm not sure if I'll play it again, but at least now I can dip in and help the kids if they get stuck.

You can support Josie by buying Lego Pirates of the Caribbean