Lego Pirates of the Caribbean 3DS 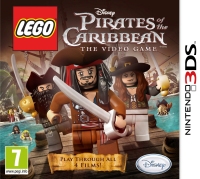 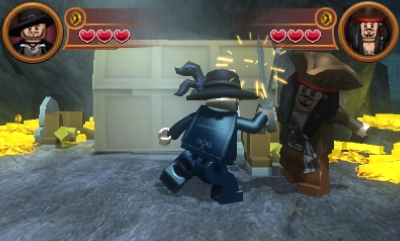 Lego Pirates of the Caribbean: The Video Game bristles with high seas imagination. But beyond the portability of this visually impressive version, there are still a few holes in what has become the second tier of Lego games next to the Wii, 360 and PS3 versions. Long story short, bring back multiplayer.

The Lego videogames are such a great combination. I still like playing Lego now and again with my younger sister, and they always pick such cool themes to base the games on. I've played through quite a few of them with my friends. Everyone gets involved pointing out what we need to do next and wrestling the controller from whoever isn't getting it.

Lego Pirates of the Caribbean: The Video Game is out right after Lego Star Wars III: The Clone Wars so we're a little spoilt for choice for our pre-going out entertainment. It doesn't seem to have affected the game all that much, and the 3DS versions of both look pretty amazing.

The downside of the 3D screen is that only one of us can see the game at a time though. This means that what has previously been something of a rugby scrum of suggestions and players, has turned into a more solitary and refined pursuit - we have even taken to passing the 3DS around the group in turn. How grown up is that?

Even though I haven't seen the fourth film yet, it's out in May, I can really tell that the developers had a great time working with all the new Lego pieces and characters. There are some really nice touches like being able to be absorbed into the ship, and building ghostly Lego characters who will then go and do your bidding.

On the 3DS it feels and looks much more like the big console versions.

Whereas the DS versions of the Lego games are really cut down to fit onto the system, on the 3DS it feels and looks much more like the big console versions. This creates much more of the feel of the console version, but still lacks the larger and more populated locations on the Xbox 360, PlayStation 3 and Wii. This notwithstanding, there are still an impressive 20 levels to explore with over 70 characters from the films to win. Once unlocked these can then be used in the Freeplay mode to get access to previously unavailable areas.

The biggest downside - which isn't helped by what I said earlier about the 3D viewing angle - is that there is no multiplayer mode. I know this hasn't been included in the DS versions of the Lego games since it was dropped in Lego Harry Potter, but with so much more horsepower on the 3DS it feels a bit of a compromise not to be able to team up.

There is a nice StreetPass feature that sounds great - although I've yet to pass anyone else with a 3DS to try it out. What happens is that while you are out and about the 3DS keeps an ear out for other 3DS's in the area, if you pass one and they have been playing Lego Pirates of the Caribbean as well a mini-battle is played out in cyberspace. The person with more stuff unlocked is then awarded a prize for them to discover when they get home - or if they notice the little flashing blue light.

I quite liked the combat on Lego Pirates of the Caribbean. Sometimes you can just attack enemies and injure them as normal, but for the non-henchmen enemy types you enter a battle more. This provides a close up of the encounter and tasks you with pressing a series of buttons quick enough to win.

With so much more horsepower on the 3DS it feels a bit of a compromise not to be able to team up.

Of course this is all interspersed with the usual Lego videogame fare. There are some great Pirate themed puzzles and animals to ride, usually achieved by pressing switches or building vehicles and devices. These still manage to stump me from time to time, whereupon I'd pass the 3DS onto another of my girl friends to solve. Some nights we can a bit carried away with playing the game and don't get round to going out till it's almost closing time. It's our little guilty secret

Even though it doesn't make full use of all the great 3DS features - camera, tilt controls and online - there is so much to make you chuckle that it still seems like great value. Where else would you be able to use a ghostly plastic Halibut to dispatch Lego Pirates. Next time though, I'm expected multiplayer and augmented reality gameplay.

You can support Rowan by buying Lego Pirates of the Caribbean