Lego Pirates of the Caribbean DS 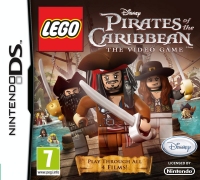 Pirates of the Caribbean DS crams in a huge amount of content into the little DS. Even with all this though, the lack of multiplayer, some special abilities and reduced levels means that this feels second rate next to the Wii. Here's what our junior gamer made of it...

I'm not very keen on the insides of bodies, they make me go all wobbly. So I've not seen the Pirates of the Caribbean films, because it has lots of open-body bits in it and ghosts as well. Also, I'm not usually allowed to watch films that are a 12.

I do know about the story and the people in it though, because my brother has some of the Lego for Pirates of the Caribbean and we play with it quite often. So I was quite excited when I realised that the Lego videogames for my DS and my Wii were for children who were 7.

Because I mainly play on the DS I got that version and my brother got the Wii game. I've played most of the DS Lego games and I really like how you can collect all the people from the films they are about. I make my own lists when I'm watching the films and then tick off each person I find in the game. Sometimes they seem to miss people out - especially if they are just in the background - but most of my lists are ticked off now.

Pirates of the Caribbean DS is pretty good. It has a bit better graphics than the last Lego DS game I played, Lego Star Wars. It does a clever outliney thing when you go behind scenery so you can still see yourself -- and I like how the Lego guys look with their little black outlines.

There is loads to do and lots of people to collect, although because I can't watch the films I haven't got a list to tick off this time. But the game has it's own kind of list so you can see how many people you have left to find. I like this because collecting is fun.

When I saw my brother playing the game on the Wii though I realised there is quite a lot missed out on the DS. The little Lego clips from the films are much shorter. I think that's a shame for someone like me who doesn't know the full story. On the Wii it makes more sense about what you are doing because you've seen the different characters and stuff. On the DS you just get a very short clip and then have to get on with playing without really understanding why.

But when I'd finished it once I started playing Lego Pirates of the Caribbean (Wii).

The Wii game also has a lot more to do in each level, and you can play with two people at the same time. I used to enjoy multiplayer on the old Lego DS games but they stopped letting you do that after a while.

I also liked how you could use the compass on the Wii game to get it to tell you where you should go next. Even though the DS game is a bit simpler I still got stuck sometimes and this would have been a handy trick -- but I don't think you can do it on the DS.

You can support Ben by buying Lego Pirates of the Caribbean