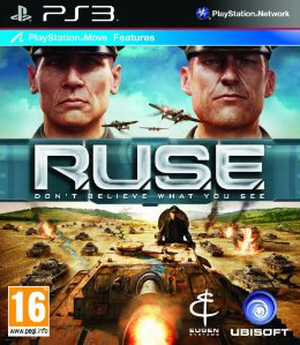 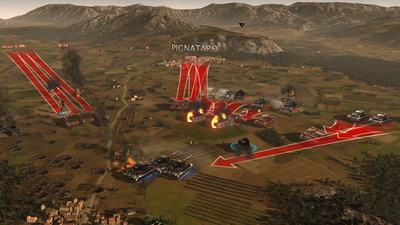 RUSE for PlayStation 3 Move is a strong attempt to bring real time strategy to a console. The motion controls offer the fine unit control that is usually missing when using a game pad. A deep and enjoyable conflict is slightly let down by a narrative that fails to put you in character for this WWII strategy title.

As a former fan of real time strategy (RTS), I was hoping that RUSE would return that old sense of satisfaction I used to achieve with keyboard and mouse back when you still needed a DOS boot disc to play. Does it make pretending to be a general a satisfying combination of multi-tasking, strategic thinking and quick clicking or am I still hampered by input method?

Ever since Command and Conquer was converted to the original PlayStation, fans and developers have tried to get their head round how to manage the controls when translating the genre to game pad. The best examples, such as Halo Wars have successfully simplified the experience to make it work, but Move's precise controls offer the possibility of a console strategy that isn't dumbed down.

RUSE uses both PlayStation Move and Navigation controller. The thumb stick moves the camera while everything else is handled by gestures and triggers. Whilst gesturing to rotate seems cumbersome the act of clicking on units and pointing to spots on the map is considerably faster and more precise that can be achieved with a stick.

This is an important victory for Move, but one I quickly forgot as it became second nature. Whilst still not quite as efficient as a PC, lacking the complex keyboard inputs it still feels like a step forward. In fact, even with an ironically well formed set of game pad controls available on RUSE, I couldn't imagine going back to the old way of doing things. And this will make the PS3 my machine of choice for these types of games.

By seeing things from a different perspective it gives you a sense of being a real general, making life and death decisions.

RUSE may be labelled a World War II RTS, but it does have a few tricks up its sleeve. Available throughout your campaign are a number of Deceptions, hence the game's title. These can be anything from radio silence to hide your units or decoys to fool opponents about where your real strength lies. Whilst none of these tricks seem overly powerful, with careful combination, they can turn the tide of a battle.

Although playing a successful Ruse against an opponent feels wickedly satisfying, when the tables are turned it left me feeling cheated, such are their psychological impact. Seeing tanks roll in on two fronts gave me a real sense of panic as I desperately tried to assess if my enemy really does have that many units or whether I'm just chasing wooden constructs. Whilst adding a new twist, this is an area that needs to be carefully balanced for online play if a committed community is to develop.

Admittedly not a headline feature, the fully zoomed out view was actually one of its more impressive tricks. Whilst up close RUSE looks like a poorly presented virtual battlefield, pulling out and seeing things from a different perspective gives you a sense of being a real general, making life and death decisions.

Whilst zoomed out, you can see the sheer scale of the battlefields, with the map including neighbouring conflicts. Those other battles are full of squads of AI soldiers managed by their own generals, but contributing to the combined effort. It isn't something I've seen before and added immeasurably to the feeling of playing your part in the greater war - a little like last year's MAG. Securing the bridges in Holland becomes much more than just "beating" the level and more about your overall impact in the offensive.

RUSE is a success for PlayStation Move providing potentially hours of enjoyment for those wanting to wear the commander's uniform whilst sat on the settee.

RUSE provides an amazing amount of content through its massive single player campaign, skirmishes - fictional "what if" scenarios - and online multiplayer and cooperative modes. Playable as six different nations, each one has a full complement of historically accurate units. Whilst they might appear to be a similar collection with different skins, facing a Tiger tank is significantly more terrifying than a Sherman appearing through the trees.

The campaign, which is unfortunately rather dryly presented, covers well known battles such as Normandy, but also the less well travelled arenas like North Africa and Monte Casino. Whilst this broad geographical range adds variety, the cut scenes that attempt to add human drama to the narrative are a bit of a failure. The acted interludes are simply not as engaging as the action taking place on the battlefield, which left me concentrating on the mechanics rather than playing the part of General Sheridan.

RUSE is a success for both the PlayStation Move and as a viable means to play virtual war games on a console, providing potentially hours of enjoyment for those wanting to wear the commander's uniform whilst sat on the settee. With just a little more skill in writing they could have told a story as engaging as the unit management.

You can support Jon by buying RUSE