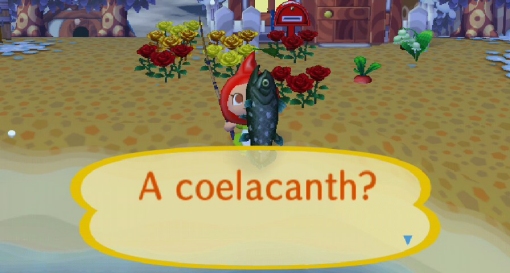 It's been quite a mundane week in Oakwood; each day has simply been about completing chores, selling fruit, and checking the shops for any interesting items. To be honest, that's all I have had time for!

As usual on a Sunday, I found Joan and bought some turnips to play the Stalk Market during the week. This week my prices were terrible! I could hardly make a profit on any day.

This meant that I hunted further afield to find an online player with better prices - easily achieved through a forum, thank goodness! I ended up making a tidy little profit on my few turnips, even after leaving a gift for my online host.

I'm still trying to catch a few of the winter fish, I'd really like a silver fishing rod to help with that!

There was one very exciting event this week - Tom Nook sold me a silver net! Very occasionally he stocks silver tools, which don't really look much different to the normal ones, so you have to keep your eyes peeled. Apparently the net will make it easier for me to catch bugs. I can't really test it until the summer though, there aren't that many insects around during the winter months.

I'm still trying to catch a few of the winter fish, I'd really like a silver fishing rod to help with that! Hopefully I'll be able to catch the outstanding ones before they disappear at the end of next month.