It's been a few weeks since the last update from Oakwood but until Easter there hadn't been much more to report. I've been slowly collecting items that were missing from my catalogue, fishing and bug catching when new fish and insects became available, and doing lots of gardening.

My grass is slowly growing back and having plenty of flowers planted is helping - I must confess to being very relieved if I fire my game up and see that it's raining, so that I don't have to water all the flowers!

I've had a couple of new patterns from Wendell the travelling walrus, and I've also managed to recycle some carpets with Saharah. As well as that, one day when I popped to the city, I managed to bump into Gracie who gave me a fashion review! Luckily I was wearing a co-ordinated outfit, so she thought I looked pretty good, and gave me a 10% discount in the store on that day! 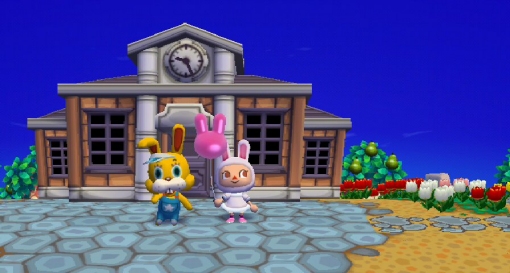 Bunny turned up outside my town hall having hidden Easter eggs all over town.

On Easter day there was a special event in town - Zipper T. Bunny turned up outside my town hall having hidden Easter eggs all over town. I had to wander off the paths to find them all, but it was fun. Some of them had candy inside, while some of them contained Bunny Foils which could be exchanged for the Egg series of furniture. There is a lot of guessing going on as to which character is dressed up in a bunny suit for this festival - I didn't care too much, as long as I didn't have to do endless hunting and get duplicates, but thank goodness, this time the hunt was simple! Zipper T. Bunny gave me one and only one of each item in the set, and I happily took all the Egg furniture home to my main room.

The Egg set looks pretty weird in my house, but I like it - the clock does funny things on the hour, you can really play with the toy, and I'm very pleased to have a theme in my house which contains a music player, too. My home is so much better now that I have K.K. Slider's songs playing all the time!

There have been a couple more DLC items from Nintendo recently; a Shamrock Hat to celebrate St. Patrick's day, and then a DSi bench which arrived on the day that Nintendo released the DSi in the shops here. Nintendo are currently running a competition to design an item of summer DLC so if you're interested in that, details can be found here.

You can support Clare by buying Animal Crossing 14: Easter Bunny