As I sit down to write this, I do wonder how many weeks it will be before I have nothing to say. There are plenty of other games that really wouldn't hold any interest after 5 weeks of playing at least an hour a day. Actually I daren't look at my Wii records to see how many hours of gameplay I've clocked up! But I'm still loving it and there is still so much yet to discover, despite having had exciting things going on every day in this alternate reality! I've finally found an SD card for the Wii, too, so I've been taking lots of in game photos which has been fun.

On Monday I was hugely excited to go to the City and finally find Resetti's Surveillance Centre. Resetti can be quite an annoying mole who, in previous games, popped up and shouted at you if you forgot to save your game properly. He still does this, I think, but also in this game he has a secret hideout which you can only access in the evening on a random day. We'd been looking out for it for a couple of weeks and not spotted it, so it was great to see it! I am now the proud owner of a Silver Shovel.

On Tuesday Nook closed his shop for a day to remodel. I must confess I hadn't been looking forward to this, as I love Nook's Cranny for its long opening hours! Still, when the bigger Nookway store opened the next day it was nice to have a bit more choice available, even if the shop does close earlier. 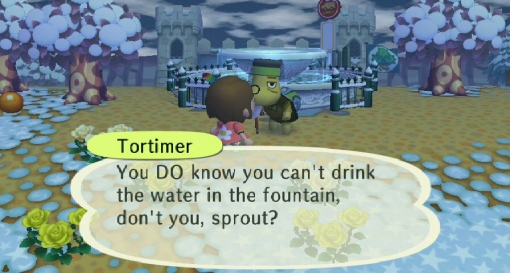 I managed to connect with someone on WiFi whose turnip prices were fabulous.

On Wednesday I finally received the golden watering can from Pelly at the Town Hall! This means that Oakwood has been a perfect town for a whole 15 days. Proud of my perfect town, I opened it up to visitors and finally used Wii Speak properly for the first time. It worked well and was fairly clear, but I'm still not sure I like it, personally. I'll keep going and see if it grows on me - I know some players who really like it, but I wonder if they are people who don't have their family wandering into the living room to talk to them all the time!!

It was a good day for the Stalk Market, too - I managed to connect with someone on WiFi whose turnip prices were fabulous; having bought turnips for 90 bells apiece, I sold them for 478! So I managed to make over 2 million bells, which at this stage in the game makes me rich indeed, for someone who's playing without any time travel! I used the money to pay off the last of my mortgage.

Having paid the last portion of my debt, on Thursday I had a beautiful flag outside my house to show that I'm debt free. I'm very proud of it! Also on Thursday it began to snow in Oakwood, and the snow finally stuck! I spent a while hunting around for the two snowballs that appear in town every day on snowy days but could only find one of them!

Friday was a really exciting day - finally my fountain was built!! Tortimer stood in front of it all day long, and I was able to show it off to a few guests who came into my town that day. I'm looking forward to throwing an axe into it and hoping for the gift of a silver or golden axe, but apparently this can take some time.

I also managed to find my two snowballs for the day and roll them together to make that perfect snowman. I love the Snowman in Animal Crossing, not only does he send you exclusive furniture but he's also quite chatty, and can be quite comical with it!

Some of my villagers challenged me to a game of Hide and Seek in the evening. This is a new feature in the game.

Some of my villagers challenged me to a game of Hide and Seek in the evening. This is a new feature in the game which I hadn't seen before - one animal will suggest a game, and when you accept, that animal rounds up a couple of others. You meet outside the town hall and they run away to hide, then a 15 minute timer starts and you have to find them all before your time is up! Luckily I managed it, although it's surprising how well brightly coloured animal neighbours can hide!!

Over the weekend I'm hoping to find enough time to make some Snowmen in the game, but it's going to be busy in real life so that might be all I have time for. I've donated some more bells to the town fund so now I have a hard decision to make, do we want a lighthouse or a windmill in town? My other human residents have voted for a windmill, so it might just have to be that - which gives me something else to look forward to next week.

Oh, and there's a fishing tournament today (Saturday). These can be great fun; whoever catches the longest fish wins a cup! Luckily I caught a pike during the week, which is one of the biggest river fish at this time of year, so I've kept it in my house. I'm planning to submit it at the last minute, so that none of those pesky animals can go out and beat me!

You can support Clare by buying Animal Crossing 05: Finally, a fountain