Just as the long-awaited windmill was about to be built in my town I had to leave the Wii behind for a week, as real life took over and we went away for Christmas. In fact the last few days of the school term here were so busy that I didn't get a chance to play those days either. So, for the first time since owning the game, when we got home from our week away I broke the time travel rule.

The game is set up so that you can override the clock settings if you wish, so it was quite simple to turn the clock back to each day that I hadn't played, and complete the 'essential' tasks for that day. For me these include watering flowers, throwing an axe into the fountain, rolling snowballs to make a Snowman (in winter of course!), and checking turnip prices. Everything else is incidental, or at least can wait until a day when I have more time!

Of course there was also the special Christmas Eve event to catch up on, when Jingle the reindeer visits towns to deliver presents on Santa's behalf. Although I believe this event existed in the Animal Crossing Gamecube, I hadn't ever played it before; it wasn't in Animal Crossing: Wild World DS. You have to disguise yourself each time you speak to Jingle, then he will give you a new present each time. After a great deal of perseverance (because he gives you duplicates!) and a lot of different disguises I finally ended up with the whole Jingle set of furniture. I think this event would have been much better with Wi-fi friends to play with, but I didn't find anyone online when I was playing! 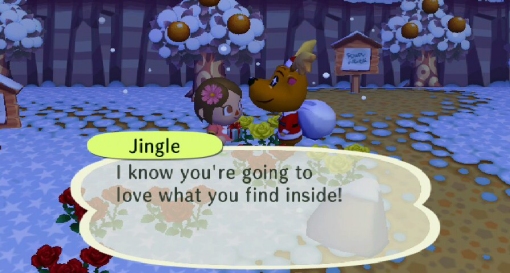 Of course there was also the special Christmas Eve event to catch up on, when Jingle the reindeer visits towns to deliver presents on Santa's behalf.

It took me a couple of days to catch up on the 9 days' worth of play that I'd missed, then I was back into real time. Having lost my time travel virginity I think I will probably adjust the clock most days as otherwise I simply won't have time to play at the time of day that I need to in order to track turnip prices etc., especially now that I have the top upgrade of shop - sells more but is open less!

An online Animal Crossing friend of mine has released an updated version of a little program that can keep track of your catalogue of items and all other collectibles in the game, so I spent a while fiddling with that and checking off items that I already have. The geeky side of me comes out at this point and I start working out percentages of things collected in each category; I'm about 60% done overall!

New Year's Eve was also marked in the game, with a huge countdown clock in front of the Town Hall.

New Year's Eve was also marked in the game, with a huge countdown clock in front of the Town Hall. Tortimer the mayor gave everyone party poppers for the big moment (but I missed it because I was out partying in real life!). On New Year's Day Tortimer was still in town, giving out New Year's shirts to everyone. Apparently there are different designs for each year, I suspect they're linked in with the animals from the Chinese New Year, as the design on mine certainly looked like an ox - but I'd have to do some serious time travel to test that theory and I'm not ready for that yet! Catchup and clock adjustment is one thing, but time traveling a whole year is a bit much!

Other things of note that have happened in Oakwood: I got the silver axe from my fountain goddess - the gold one is still eluding me though! The windmill was built in town and looks beautiful down by the beach. One of my animal neighbours has moved out, and a new one has moved in, but I have yet to have a proper chat with him as he was in the middle of unpacking when I met him! And these days Blathers the museum curator seems quite happy with the way the displays are coming on, so I must be doing ok with the bug, fish, and fossil collecting too.

You can support Clare by buying Animal Crossing 06: Christmas and New Year