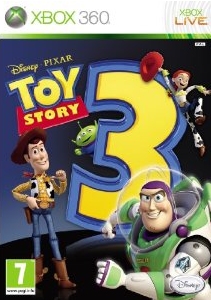 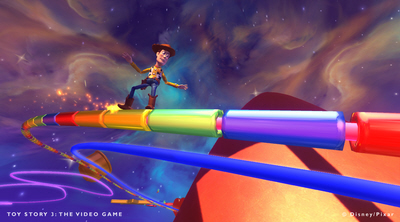 Toy Story 3 imagination wins through to create a game of real variety. Creative moments abound in both the story and open world modes - one for all the family to enjoy, casual or hard-core.

The Toy Story 3 movie almost didn't happen because they were worried it might cheapen the brand. No such qualms in videogame land though, where movies are knocked off as derivative games almost daily.

Thankfully then, the same high values seem to have been applied to the Toy Story 3 game on 360 and PS3 as it has the movie. On first look it appears that not only does the story look great for more casual players, but there have been some inventive game play ideas to keep the specialists entertained as well.

Dig a little deeper though and things start to get a little more wobbly. Toy Story 3 like many movie games before it won't take a serious player more than a few hours to finish the campaign. Even younger players, who will take a little longer, are unlikely to see more than five or six hours story play before they have completed it.

This is compounded by the absence of Tom Hanks and Tim Allen. At first you get the feeling that Woody and Buzz are having an off day, but soon you realise there are two imposters calling the shots. These sound-alike voice actors do a stalwart job, but they will never fully be either of our two heroes.

It feels a little like going back and watching the first season of the Simpsons. There is something nightmarish about the pseudo-familiar presentation and voices. It's still the Simpsons back then, but not quite how we know them now. And it's a real effort to forget that once you know it.

Not a million miles from Red Dead Redemption wrapped in Pixar cuteness.

Happily though, other voice actors are present and correct. Joan Cusack, Jeff Garlin and Kristin Schaal stand out with some great one-liners and general dialogue that could have come straight from the big screen.

These niggles aside, we can move onto much more positive territory. Although it's a little short the Story mode is certainly rich. A combination of running, jumping, exploring and some on-rails shooting make for a great ride. Add to this the great locations and character models and you have an impressively Pixar looking videogame.

Alongside the Story is the Toybox mode. This is an open world Wild West environment where you can take things at you own pace - not a million miles from Red Dead Redemption wrapped in Pixar cuteness.

Dotted around the world are a series of missions that range from racing Bullseye or creating monuments to collecting lost cows. The big win here, particularly for more hard core games is the ability to customize both the environment and the characters.

Although I'm not usually drawn to this sort of world building - Little Big Planet just seems like so much work - here it is simple direct and gratifying. In fact, this got me going back to the story mode to unlock more items to us in my world. And here we find the real justification for that shorter main game. By incentivising repeat plays in the way they offer a game experience much nearer the mark duration wise.

The missions themselves had a sense of fun and variety about them that I appreciated. There are some racing modes, not to mention riding Bullseye, that stand out as real high points. It feels like here more than anywhere else you can clearly see the Pixar inventive minds hard at work. Give them a blank canvass and they are perhaps the best people on the planet to fill it.

The sheer imagination at work here, and the attention to detail in the presentation, was more than enough to win me over.

Although there is still the slight sense that this was created for casual players first before being extrapolated for the more specialist market, it certainly delivers on its promises. This is a Toy Story romp through and through.

The sheer imagination at work here, and the attention to detail in the presentation, was more than enough to win me over. Sure, the campaign only lasts a few hours, and yes I know that this is all pretty one dimensional gameplay, but in terms of fun and gameplay I had a great time here.

It would be easy to complain about the nuts and bolts here, but the overall experience is one that I’ve been coming back to for some time now.

You can support Andy by buying Toy Story 3