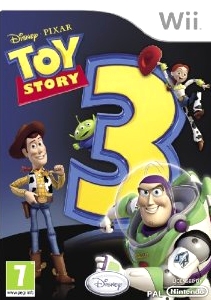 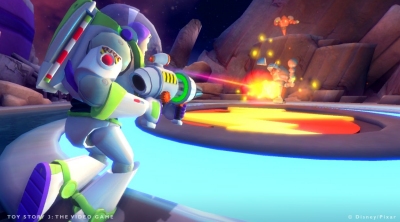 Toy Story 3 Wii celebrates the franchise as much as offering a film tie-in experience. The Wii version promises to be impressively similar to the 360 and PS3 version. More surprising though is the level creation Toybox mode.

Toy Story 3: The Video Game on the Nintendo Wii has at its centre a platform game where you can play as either Sheriff Woody, Buzz Lightyear, or Jessie - each with their own special abilities. Woody for instance can use his pull string to Tarzan-swing across gaps, Buzz can throw objects long distances, and Jessie has more agility.

Each character needs to be used at different times to progress, and a split screen mode enables you to work co-operatively to solve the platforming conundrums.

In the Story mode you work through nine themed levels that follow the events of the movie. But alongside this the game also takes in locations and scenes from the previous films. The video gaming opening sequence from Toy Story 2 for instance, should work well.

That is all as you would expect. But in Toybox mode there is quite a surprise - you can use objects and characters found in the Story mode and create your own levels. As you explore the sandbox world - and here we find more locations from the older films - you earn money and objects to expand your creations that also take in characters from other Disney/Pixar franchises.

Perhaps most impressive here though is that the Wii version retains all the features of the next generation 360 and PS3 consoles.

Perhaps most impressive here though is that the Wii version retains all the features of the next generation 360 and PS3 consoles. The game is also available on Nintendo DS, PS2 and PSP. Some versions of the game have their own exclusive content - the PS3 version for instance lets you play as Emperor Zurg - complete with his own missions.

Although no clear news on MotionPlus or Natal support has been announced, it seems the game will let PS3 players make use of the new Move motion sensing controller. This is likely to be via a set of Toy Story themed minigames than in the main experience - the Wii version offers a similar set of games that make use of its gesture controls.

But beyond these nods to the different consoles, it is the ability to create your own levels in the Toy Box mode that will really impress. This takes the level creation ethos of games like Little Big Planet PS3 and WarioWare DIY and puts them in the hands of a much wider audience. The proof of the pudding will of course be in how intuitive it is and how good the community sharing features are.

Pixar take something cold and computer generated and inject humanity and life into it.

The Toy Story brand is of course another big reason to play. Many of us have grown up watching the films, or with our offspring slowly discovering them. The game, like the films, offer that same Pixar experience that takes something cold and computer generated and injects humanity and life into it. Quite simply it's that animated magic you won't find anywhere else - more than the special features and mode of the game.

Considering how derivative many movie tie-ins are, and how they miss both the family and more hardcore market, it is refreshing to see a game that looks to get so much right. The combination of a strong two-player story alongside the sandbox creation is one that offers real value to gamers of any age.

You can support Andy by buying Toy Story 3: The Video Game