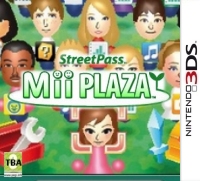 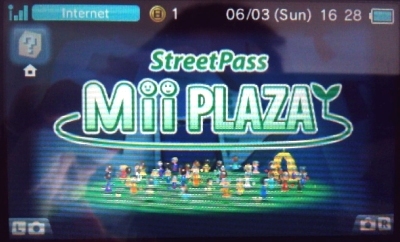 Mii Plaza is a nice hub for all the Mii's you've met, but it also gives you a reason to take your 3DS with you when you go out. Clever thinking from Nintendo once again.

I wasn't expecting the 3DS Mii Plaza to be anything more than the Mii Plaza on the Wii. However, what you actually get on the 3DS is something a little more engaging. There are games, collectables and the novelty of StreetPass that registers any other 3DS's you pass while out and about.

To get started you first use the Mii Maker to create your home Mii. You then specify if you want this information to be shared via Mii Plaza's StreetPass mode. You can select a greeting, location and favourite game.

The novelty of going into town with the Mii Plaza in StreetPass mode had the kids constantly checking the top of the 3DS to see if the indicator light had turned on. Sure enough, even though we were testing the 3DS a few weeks before launch, the little blue bulb started glowing. I'm guessing this was from test retail units in shops, although maybe other reviewers were out and about Exeter last weekend.

When we got back in the car I opened the 3DS to be greeted with a notification that I had met two new Mii friends. These Mii's trotted into my Plaza each carry with them an icon for their favourite game. The kids were rather excited to say the least.

The kids were rather excited to say the least.

These Mii's looked very nice and the kids were fascinated to read where they had come from and what their favourite games were. But more than that we could then use these new friends in the two Mii Plaza games: StreetPass Quest and Puzzle Swap. Each person you meet represents one go in each of these games.

StreetPass Quest locks up your Mii and then calls on the Mii's you have met to free him/her. You can choose whether to use magic or a weapon against the different enemies that blog the way in a very simple role-play game. The Mii's you have met each have a level that is determined by progress they have made on their home 3DS.

Puzzle Swap puts a 3D picture on the top screen and then lets you swap pieces with the Mii's you have met. Slowly the picture is revealed as you meet more and more Mii's. I'd only met a couple of Mii's on my first trip out with the 3DS and was now keen to meet some more for more goes on these games.

You can also pay for goes on both the Mii Plaza games by spending your Play Coins. These are won in a variety of ways but initially come from the Activity Log awarding you them for the number of steps you have taken.

These games provide a couple of nice little incentives to keep your 3DS with you where ever you go.

During our trip out was had earned five play coins from walking around with the 3DS in my bag, so I could buy another two goes (they cost two coins each) on one of the games.

As with any pre-installed games these aren't fully fleshed out experiences and the novelty will no doubt soon wear off. But they do serve a clever purpose.

For StreetPass to work, and more generally for the 3DS experience to be shared with more and more people, Nintendo need players to take their 3DS's out with them. These games provide a couple of nice little incentives to keep your 3DS with you where ever you go.

I'm off into town for lunch today, I wonder if I'll pass any other 3DS's on the way. Even though it is only a rough sketch it feels like an intriguing new way to play an adventure game. In the hands of a franchise like Animal Crossing or Pokemon it would be very exciting indeed.

You can support Andy by buying Mii Plaza