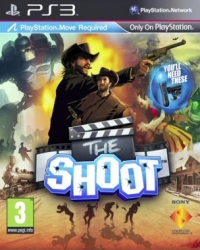 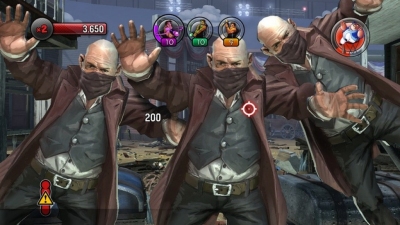 The Shoot's innovative Move controls make way for a simple shooting experience as playful as it is competitive. Shooting, dodging and punching combine with score-rich environments to create a fresh light-gun experience.

The Shoot is a run of the mill on-rails shooter that visits five different movie sets: western, sci-fi, zombie, mobster and underwater. Each set has four stages and each is filled with static and moving targets to shoot. The more hits you get in a row the greater your points bonus and the more special moves you unlock.

It's a clever conceit, taking the action to a movie set, as this means you aren't shooting at actual people. They fall apart in splinters of wood rather than blood. You also can't die but are given another take - should you take too much damage or make the director angry.

This may make it all sound a little average, which although is partially true, doesn't get across how much competitive fun the game is. Compared to the back slapping and bravado of Time Crisis Razing Storm the experience here is positively joyous.

Then there are the quick draw moments where you have to point your controller down, while you wait for your opponent to draw. Whereupon it's a race to see who can shoot first and of course, as elsewhere, there is a focus on head shot accuracy for added bonus points.

Alongside these antics are environments full of destructible elements and hidden items that trigger explosions. Of course there are also items you shouldn't shoot as well - innocent passers buy who will get the director riled if they are shot.

It's all a lot of fun on your own and really comes to life if two players compete simultaneously.

It's all a lot of fun on your own and really comes to life if two players compete simultaneously. Although I'd have loved a four player mode - and really don't see what the difficulty is with this - the two-player challenges have been well thought out.

Beyond the arcade style main mode, there is a Career mode where you progress by shooting a certain amount of enemies or items. Then there are the Score Attack and Score Challenge modes for a shorter more intense experience.

With the Move controller, shooting is accurate and feels responsive. There is a little lag, but this is par for the course with light gun games. Load times are a little slow for each set, but once loaded you move from stage to stage pretty quickly.

Like all games of this sort the experience is pretty short. You'll get through each level in around 30 minutes, meaning the main game will last just four hours or so. That said, there are plenty of reasons to revisit and go for a higher score - or add a second player.

If you have younger kids and are relatively happy with them shooting at things then this is about as non-violent as you can get - apart from games that don't feature people at all I guess. The wider game play reflects this by keeping the focus on fun rather than depth.

This is a PS3 Move game that wouldn't work without the innovative Move controller.

Alongside Sports Champions Table Tennis and Tumble this is a PS3 Move game that wouldn't work without the innovative controller. Even the Wii would struggle to deliver the combination of shooting and dodging mechanics found in The Shoot.

You can support Andy by buying The Shoot