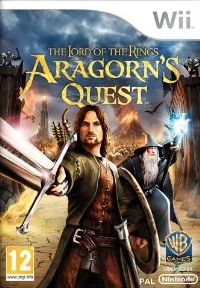 Other GamePeople columnists have reviewed this from their perspective - huh?:
Reporting Gamer (PS3)
Teen Gamer (DS) 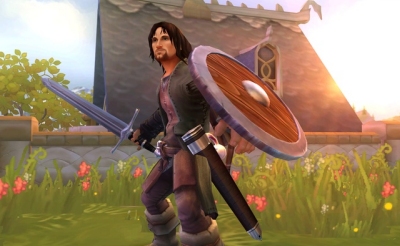 Lord of the Rings Aragorn's Quest Wii creates a drop-in multiplayer fighting game that matches the big console versions. For me it was a nice way to introduce my kids to the Films - that will hopefully then inspire them to read the books.

I'm about to introduce my kids to Star Wars (episodes four, five and six naturally), it's an exciting moment. I get to share some of my childhood enthusiasm for it and see how well it holds up for them.

By the time they are old enough for Lord of the Rings, I expect those films will be looking equally dated - but hopefully will still carry the seed of something magical. They are more than aware of my love of Tolkien and are itching to experience it for themselves first hand.

They've started reading the books umpteen times but never seem to make it much past Bree. For me it was the films that offered the inspiration I needed to press on into the books.

Aragorn's Quest plugs this hole rather well (ed: I saw that one coming a mile off) with a Lord of the Rings adventure on the Wii designed with families in mind. And believe it or not this is the first Lord of the Rings game to be released on the Wii. Whereas the DS, PS2 and PSP versions are dialled down somewhat, the Wii game matches the game play of the 360 and PS3 perfectly, and has a good stab at the visuals.

Lord of the Rings: Aragorn's Quest is essentially a brawling videogame using characters from the films. You play from a third-person view and control Aragorn via a combination of the Wii-mote and Nun-chuck.

This is the first Lord of the Rings game to be released on the Wii.

Being a ranger, Aragorn has a bow in addition to his hand to hand combat weapons. This uses the pointing ability of the Wii-mote nicely as you wrestle to land a shot on target. A zoom in feature is provided to help you hit enemies further away.

For families the biggest feature is the ability to play the game co-operatively. A second player can join Aragorn at any time. They bring Gandalf into the fray and have access to a wide range of magical offensive and defensive moves.

The usual enemies are encountered, as you would expect in a Lord of the Rings game, and by the end you will have battled Orcs, Trolls, Ogres and Ring Wraiths. Although the fighting is pretty full on, and certainly deserves its 12 PEGI rating, I appreciated that rather than gore and blood, impact is depicted with flashes of light. And rather than dying gruesomely, fallen enemies slowly disappear.

For families the biggest feature is the ability to play the game co-operatively.

It wasn't until my oldest son started playing with me that I realised I had been playing the game in a very focused way. He, on the other hand, was much more distracted by the various side quests to collect weapons, coins, and orbs.

I was glad he did, because there were a few areas I had been stuck on before benefiting from the extra equipment and attacks he had won - not to mention the increased strength from the orbs.

He was surprised how good the game was - which explains his slowness to join me playing it - as he had played the DS version at school and found it rather limited.

On the Wii there was more than enough to entertain us both for a good ten hours. The only problem now is decided when he is old enough to see the films for himself.

You can support Andy by buying Lord of the Rings: Aragorn's Quest