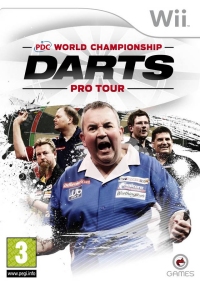 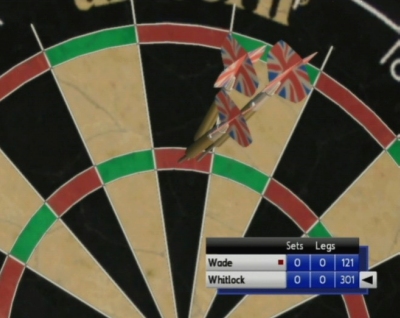 PDC Darts World Tour Wii adds MotionPlus magic to its strong recreation of the sport. The deft weighting and accurate orientation required here are both convincing and compelling. It may not look as good as other bigger budget sports games but PDC gets it right where it counts.

Sporting games on the Wii have been a revolution to my game playing. I have always enjoyed video football, tennis and athletics, but on the Wii the controls finally matched the graphical experience. An evening playing these sorts of games was more of a challenge and felt like less a waste of time.

I've worked my way through the different versions of Tiger Woods, Wii-Sports and enjoyed Grand Slam Tennis. But it wasn't until revisiting PDC Darts this year that I got a feel for how well it recreates the sport.

The Wii-mote is obviously a lot more bulky than a lightweight dart, but the correlation between the two actions is enough to overcome this disparity - which is soon forgotten. Like any good sport game on the Wii, controlling things with motions that approximate to the real thing creates a surprisingly strong connection between the player and on-screen action.

It's a spell we have all got used to by now, but it is no less magical today.

It's not until you think back over an evening with friends playing PDC World Championship Darts Pro Tour (to give it its full name) that it hits you - all those knife edge finishes and run away victories where you held your nerve were controlled by moving this white TV remote around in the air. It's a spell we have all got used to by now, but it is no less magical today than it was when we first picked up the Wii-mote to play Wii-Sports Tennis.

This year, PDC Darts adds MotionPlus support. This means that the game has a clearer idea of how you are moving the controller. Whereas previously you didn't have to worry too much about the dart's orientation upon release, now it has more of an effect. Weighting also benefits a little from the extra information supplied by MotionPlus.

The difference isn't night and day, but I found that playing multiplayer each of our throws looked different. If you have a slight off-kilter lean to your arrows the game does a better job of picking this up. It's a small thing but actually helped me identify my throwing style and improve some areas.

I found that playing multiplayer each of our throws looked different.

It's a shame that the surrounding game has suffered a little from a limited budget. Presentation isn't as tailored to the Wii as it might be. PDC Darts (PS3) looks much better because it benefits from the system's higher resolution. There were also a few graphical glitches from time to time - the previous player's darts being left on the board for instance (ed: unless that was just simulating someone's forgetfulness).

Apart from this the game offers all the single player and multiplayer modes you could want. It matches Tiger Wood's recent player view mode that lets you play in first person perspective. In fact, PDC outdoes Tiger in some areas like the ability to setup an eight player game for when you have more people round to play - where Tiger only offers four.

You can support Andy by buying PDC Darts Pro Tour