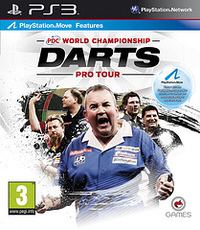 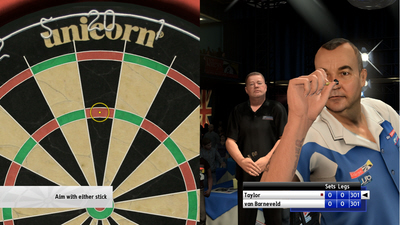 PDC Darts World Tour PS3 extends the motion controlled experience in wonderful high definition. If you are happy to wrestle with menus and glitches there is a great game waiting to be discovered here.

I never really got into the Wii. My friends all either have 360's or PS3's so that's mostly what we play when we get together. It's funny to see both of those systems now adding controllers that mimic the Wii-mote. We are actually quite happy with the joypad.

But for games like PDC World Championship Darts Pro Tour I can see it makes sense to have controls that work in a similar way to real life. I played a little bit of PDC Darts (Wii) with my Dad last year and have to admit it was actually pretty good. Even though it looked pretty ropey on the Wii.

On the PlayStation 3 PDC darts looks much better. Not only the player characters and the crowd, but the general presentation benefits from a bit more horsepower. The biggest difference though is the resolution of the board itself. Seeing it in higher definition totally changed how realistic the game felt.

The throwing works the same as it does on the Wii. You point the Move controller towards the screen to aim, holding it like a bloated bobble-ended dart, then hold a button to lock the target and perform your throw.

If you throw too hard the dart sails high, if too weak it drops low. But like the MotionPlus Wii version, you also have to keep an eye on the general direction and trajectory of your throw to avoid pulling it left or right.

This combines with the high fidelity visuals to give a real sense of accuracy.

This combines with the high fidelity visuals to give a real sense of accuracy. As me and my mates worked our way through some multiplayer games we each improved and soon established a pecking order. It made me want to spend some evenings practicing before our next session, to see if I could improve my game.

Away from the oche though it's the same old story for the Move controls. Like on Tiger Woods 11 (Move), navigating menus is fiddly to say the least as you have to hold the trigger button and gesture to make your selection. At first I thought our Move controllers were broken because nowhere does the game tell you to hold the button to navigate, and once you have the PlayStation Eye plugged in you can't us a normal controller to navigate.

If only Sony had included some sort of directional D-pad control on the Move wand - like there is on the Wii-mote - this would make things so much easier.

PDC Darts Pro Tour lacks the Wii's general ease of use that makes that experience accessible.

Although the game generally benefits from the PS3's enhanced presentation, compared to the Wii version at least, it still feels like it was created on a limited budget. It actually locked up a couple of times for us and we had to reset the system.

PDC Darts Pro Tour recreates the Wii's motion controlled magic on the PlayStation 3, but lacks the general ease of use that makes that experience accessible. The core of the game is great fun in high definition, but you have to put up with quite a lot of hassle with menus, options and setup to get to it.

You can support Rowan by buying PDC Darts Pro Tour