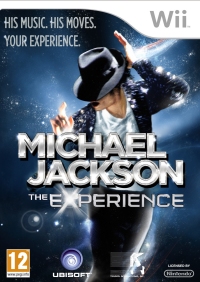 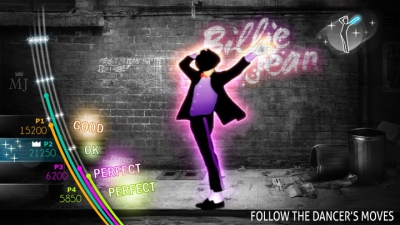 Michael Jackson: The Experience may lack depth, complexity and progression, but slick game-play and fantastic source material courtesy of the King of Pop makes it an huge amount of fun.

Before there were exercise games, there were dance games. When Wii Fit was just a twinkle in Nintendo's eye Dance Dance Revolution (Wii) was already being used to get kids up and moving around. Despite all the great fitness games out there, dance games are still much more fun, and can be a really good way of burning a few calories in your own home while making it feel like anything but work.

I'm surprised it has taken so long for someone to release a Michael Jackson themed dance game, it seems like a natural fit. I've never been a full-on Jackson fan, but I am very much a child of the eighties and my first ever record (ed: you remember, those black plastic disc thingies) was Smooth Criminal. In the intervening years it's been easy to forget just what an amazing dancer he really was, but trying to keep up with many of the routines in Michael Jackson: The Experience is a really good, and tiring, reminder.

On face value Michael Jackson: The Experience is pretty shallow for a full price game. Play is very straight-forward: you pick from one of 26 classic, and sometimes not-so-classic, Jackson tunes from Bad to Earth Song, and dance along with either Michael or one of his backing dancers. Up to four people can play at a time and you get scored on how well you keep up, so there is a nice competitive element to it, but that is a complex as the game gets.

Dance games are still much more fun, and can be a really good way of burning a few calories.

There is no progression in the game, and all the tracks are available right from the start. However that doesn't mean I didn't enjoy it, I just expected a little more - not having tried this Just Dance (Wii) formula before.

As well as the game itself there are a series of videos by three dancer showing you the various moves that made Jackson famous, but they are not integrated into the game and just seem like an add-on. I expect more serious fans might find them interesting, but I'd have rather they'd dumped the videos and added more music to the main game.

I was really tempted to dive straight in and try my skills with Thriller, but the available difficulty levels of "hard" (for the backing dancers) and the very appropriate "inhuman" (for Michael himself) had me heading for some of the easier songs first and I'm glad I did. Jackson was a very slick mover and, unless you already know the routines, you'll need a few goes to get some of them right. However, the actual mechanics are simple enough to master.

Using just one controller each you follow the motions of the dancers on the screen, with icons popping up to warn you about the next set of moves. The production values and visuals for each track are stunningly good for a Wii game. The Wii doesn't have much graphics power but the developers have created incredibly fluid motion with beautiful visuals that make it very easy to see what's going on while mimicking the look of the original music videos.

You can actually get a nice little workout.

Because it only uses one controller I'm not convinced that the game actually cares very much about what you are doing, so long as you do it in time. Like many Wii games you could probably play this sitting on the sofa, but if you are going to do that then you may as well not bother.

This game is all about getting up and getting moving, preferably with friends. You can actually get a nice little workout. Using a pulse monitor I tracked my calorie use while dancing along to some of my favourite songs, including Thriller, Bad, Beat It, and Smooth Criminal. On average I was burning between four to five-hundred calories an hour, in the upper level of what's possible at home and pretty good for something that's really just designed to be fun. I'm not sure you'd get quite the same level of exercise for Earth Song as you will from Thriller, but if you pick your tracks carefully you can get quite a nice workout from Michael Jackson: The Experience.

Fun is what exercise should be all about.

Fun is what exercise should be all about. As I've said before, if you don't find something enjoyable it can get pretty hard to keep going. If you can burn calories while dancing along to your favourite songs then you are half way there. If you are a fan of Michael Jackson, or even just some of his material, then you'll enjoy this a lot. However, despite the great production values and graphics, with only 26 tracks this feels like poor value. But if you are a serious Jackson fan, or just feeling a bit nostalgic, this is a fun addition to the world of dance games.


You can support Luke by buying Michael Jackson: The Experience