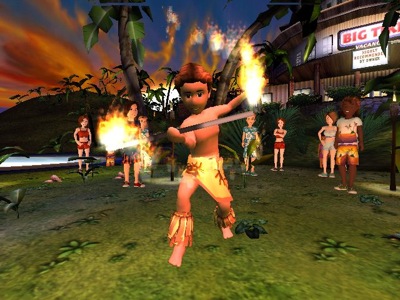 Vacation Isle Beach Party Wii is just the thing to take you away from the long cold winter while working your leg muscles.

It's cold, dark, and it's already started snowing: the idea of playing on a sunny Pacific island is rather appealing to me right now. While hopping on a plane and flying to Hawaii is out of the question, Vacation Isle Beach Party Wii might give you a little taste of the beach lifestyle in these cold winters.

My heart did sink a little at the thought of yet another budget mini-game collection for the Wii. So many of those I've tried recently have been lacklustre at best, and missed my high fitness requirements. However, I was pleasantly surprised by Vacation Isle Beach Party and while it might not be particularly original or extensive, it is well polished for a budget game.

While it might not be particularly original or extensive, it is well polished for a budget game.

There is nothing particularly original here, and at first glance I was immediately reminded of some of the games in Wii-Sports Resort and Wii Water Sports, which I reviewed from an exercise perspective a while ago with mixed results. Like Wii Water Sports, Vacation Isle is also based on a tropical island, and mostly revolves around water sports games, but the end result is slicker and more enjoyable.

There are a total of eight games, from Slalom Water Skiing, Jet-Ski stunt riding and Wake-boarding, to Hula and Fire Dancing. Each can be played with the Wii-mote and Nun-chuck, but you'll have much more fun if you have a Balance Board.

The games are all well implemented, with good production values, nice graphics and most importantly a good control system (and unlike Wii Water Sports, no major bugs). Each activity has a little twist added to them, with items to collect, sharks and squid to avoid, and points for performing tricks.

The two dance games are quite traditional, with lines of icons what to do and when, but with the added novelty of Hula and Fire dances. I was hoping that the Hula dance might make a nice alternative to the surprisingly effective Wii-Fit Hula Hoop game, but of course traditional hula is a rather more sedate dance. It's good to test out mobility by don't expect an aerobic workout. The Fire Dance is a bit livelier, but neither of them is going to have you working up a sweat any time soon, which is a shame as dancing can be one of the best ways to sneak a bit of exercise into a game.

Vacation Isle Beach Party has got the sensitivity just right, and also cracked the board calibration issues.

One of my pet peeves with many games, especially on the Wii, is poor in-game instructions, most of which are woefully vague. Thankfully Vacation Isle Beach Party gets this right, with plenty of explanation before you play each game for the first time. Most of the games are pretty intuitive, especially when played with the Balance Board which is used in a number of different setups depending on the type of sport you are doing. The only omissions were a few details on how to do mid-air tricks, but a quick check of the manual supplies the detail.

My main criticisms of Wii Water Sports was how fiendishly difficult the games were to control with the Balance Board, which was far too sensitive. Vacation Isle Beach Party was much less infuriating, they've got the sensitivity just right, and also cracked the board calibration issues - something that so many pricier games get badly wrong. You will still need a degree of control, especially at speed, but I started to get the hang of controlling my character much faster than when using Wii Water Sports.

Vacation Isle Beach Party can certainly help work the muscles in your legs, while improving your balance and coordination over time.

Just because they are simple and the controls are less sensitive doesn't mean these games are easy though. You need a fair bit of balance and coordination to do well - especially with the Balance Board in play. This is all to the good, it's great practice to help build up your balance and fine motor skills.

As I've written previously, while the Wii based fitness games struggle with the "traditional" Cardio aspects of fitness that gyms tend to excel at, they are can be very good for strength, balance, and motor control. The level of control needed to play most of the games in Vacation Isle Beach Party can certainly help work the muscles in your legs, while improving your balance and coordination over time.

More importantly, because they are well implemented and enjoyable you might actually keep playing them for longer. And with a long winter ahead of us I'll be grateful for a tropical getaway, even if it is virtual.


You can support Luke by buying Vacation Isle Beach Party