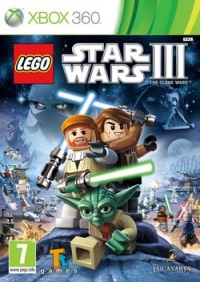 Other GamePeople columnists have reviewed this from their perspective - huh?:
Reporting Gamer (Wii)
Junior Gamer (3DS) 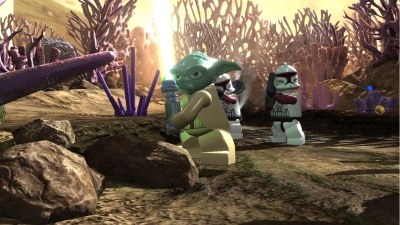 Like both its predecessors, Lego Star Wars III offers plenty of frustration, but is ultimately saved by its smart levels and irresistible charm. Gameplay additions, improved graphics and The Clone Wars' distinctive visual style make up for nuisances still present after seven games in the Lego series.

Lego Star Wars is a difficult topic to tackle objectively. After all, I've seen the original Star Wars Trilogy more times than I could possibly count, and I don't even hate the prequels. Also, there's just something about the simple charm of Lego that's completely endearing: their blocky, out of proportion cuteness, and the way complex starships and vehicles are recreated with bricks. It's a double whammy of childhood nostalgia.

The original Lego Star Wars was real gold and, as such, the set up remains unchanged six years on. Lego Star Wars III begins on Geonosis, at the end of Star Wars: Episode II. This is a logical starting point, being the canonical beginning of the Clone Wars, and it immediately alleviated my worries that, only being a casual fan of The Clone Wars TV series, I'd feel alienated if I wasn't intimately familiar with the source material. Casting me as Anakin, Obi-Wan and Padme in a recognisable scene was the best possible start to the game, and helped me to adjust to the new visual style.

Not just technically good, but in terms of visual design.

The game looks good. Not just technically good (the lighting effects, new environments and sharper textures) but in terms of visual design. The Clone Wars series has a distinct exaggerated style that fits neatly with the Lego interpretation. Designs are bolder and colours are brighter: The Clone Wars, like its parent series, is a visual treat.

Finishing the mission took me to the hub: a regular feature from the Lego games. This is the place to access your next level, spend collected studs, explore, partake in challenges or find more hidden extras. Here the hub is a Republic Cruiser engaged in perpetual combat with a Separatist Ship. This time, I wanted to get right on with the story, since most of the hub isn't accessible until it's unlocked later on.

Each campaign represents the Republic's efforts in pursuing a different villain from the Clone Wars: Count Dooku, General Grievous and Assajj Ventress. Within this each mission loosely follows an episode from the show. It works well although at times it feels more like a collection of vaguely related levels rather than a storyline, and this isn't helped by the lack of guidance regarding where each campaign sits in the timeline (you select them from a Galaxy map). I decided to pursue Count Dooku, as his first mission was set on Geonosis, where I already was.

I found a nice variety of missions across the three campaigns.

This put me in the disappointing shoes of Jar Jar Binks. Happily though this turned to excitement as I realised that this mission would involve the new Ground Battle feature, which means capturing areas and building bases on a battlefield. From these bases I could call in reinforcements: Clone battalions can even be ordered around by Clone Commander characters. This is the most exciting new feature in the game, and is generally well implemented, though it requires too little tactical thinking to really have any depth.

I found a nice variety of missions across the three campaigns. From the standard platforming levels, to Ground Battles and several vehicle based missions, there's plenty of opportunity to play as both Jedi and Clones across a wide range of beautiful environments. There's even chance to drive most of the vehicles found in the TV show: stomping across a battlefield in the Clone Wars equivalent of an AT-AT walker is a Star Wars dream come true.

Beyond the story there is, of course, the obsessive Lego collecting. Levels are all replayable with newly unlocked characters to access new areas -- for maximum studs and plenty of other secrets. Personally, most of my studs went on unlocking new characters. I enjoyed working out who each character was from their cursory appearances in the prequel movies.

It feels as though TT Games have cleverly tapped into one aspect of Star Wars fandom: the collectors. Those who collect all the action figures, the novelty items or the posters. This obsession with collection is here noted, recreated and rewarded.

I enjoyed working out who each character was from their cursory appearances in the prequel movies.

With all the excitement it is easy to forget about the issues that have plagued Lego titles from the very beginning. Lego games are notoriously unstable, and this holds true here. My game has frozen, blue screened or glitched at least half a dozen times. It's not the end of the world, but it's especially frustrating if you're near the end of a over-long level (another complaint).

Vehicles are once again difficult to steer, as controller directions sometimes don't feel like they match with the perspective you have on your craft. This isn't always the case, but as you can't reverse, it's very easy to get stuck. It's also still very difficult to judge depth (ed: we need to try out the 3DS version on you), leading to many failed jumping puzzles (and expletives).

None of these problems are game-breaking. It just boggles the mind that every review of every Lego game for the past six years has pointed them out, and they still haven't been fully addressed.

All that aside, I couldn't help myself enjoying Lego Star Wars III. It brought joy to the child in me, and was responsible for my first five hour gaming marathon in a very long time. While many Star Wars games try to tackle the series' darker themes, or go for broke with polygon counts and textures, Lego Star Wars remembers the sense of fun and charm inherent to the story. It might not be based on the most iconic of the films, but The Clone Wars proves a worthy addition to the canon.

You can support Tom by buying Lego Star Wars III: The Clone Wars