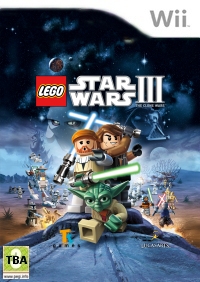 Other GamePeople columnists have reviewed this from their perspective - huh?:
Movie Gamer (360)
Junior Gamer (3DS) 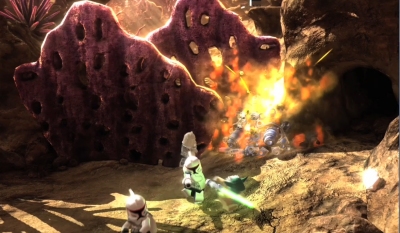 Not that we need many reasons to be excited about a new Lego Star Wars game, but Lego Star Wars III: The Clone Wars is shaping up to continue the strong showing of the previous platform games.

20 missions and 40 levels will take you through 16 different star systems of the Clone Wars era. Along the way you can explore every last inch and meet, recruit and fight characters, and learn trivia galore that tie into the TV show plot.

A new picture-in-picture feature enables you to keep track of different teams and switch easily between groups of characters. Co-op gameplay has also been enhanced with a new split-screen (rather than shared screen) mode to avoid the previous issues with camera controls. This still adopts the easy drop-in gameplay so that passing family members can join the action as they see fit.

You will also get to use a wider variety of combat moves that have a new context sensitive function to keep the controls simple. New Lightsaber abilities enable the iconic weapon to be used to cut through materials, throw at enemies and used as a grapple point for climbing. This is joined by new Force powers to solve problems your own way. You can now animated Lego objects to complete challenges, access new areas and even pick up and throw enemies.

Vehicles feature more strongly as well, with Anakin Skywalker's flagship the Resolute and Grievous' devastating warship, the Malevolence. This introduces a new navigation and flying aspect to the existing gameplay. By the end of the game you will also have tried your hand at a Republic gun-ship, Clone Turbo Tank and even Anakin's Jedi Interceptor and the Twilight.

The whole game is wrapped up in fresh lighting and animations that comes from a brand new animation engine that promises a more vibrant environment, and a substantial step forward for the series.

This time round we also have some new game play mechanics. You can now create and control new Lego kits, through 20 story-based missions and 40 bonus levels. Alongside the usual platforming things also take a strategic edge. You can now control battalions of clone troopers against the droid army, as well as build bases, deploy vehicles and call in reinforcements.

Multiple teams in separate locations can work together to complete various objectives, as players switch control in either single player or in jump-in multiplayer co-op modes.

New large enemies now guard the end of each set of levels as you fight massive bosses from The Clone Wars series. To help you with all this, there are now new dynamic moves and Lightsaber abilities - Cutting, Throwing and Climbing as well as a new grappling function. This combines with new Force Abilities that let you control Lego objects, pick up and even throw enemies to up the combat from previous games.

You can support Paul by buying Lego Star Wars III: The Clone Wars