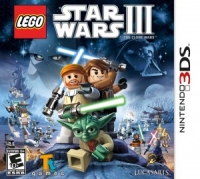 Other GamePeople columnists have reviewed this from their perspective - huh?:
Movie Gamer (360)
Reporting Gamer (Wii)

Lego Star Wars III: The Clone Wars extends the videogame series in line with the spin off cartoon. It looks fantastic on the 3DS, but no multiplayer mode makes it a lot less fun.

I've played most of the Lego games with my brother and dad on the Wii and 360. I like taking turns with them, two at a time as we all try and work out what we need to do next.

My younger brother doesn't really help us all that much, but he can still run around and kill things which he finds really funny and likes doing. The games are also about all the sorts of things that he likes, Star Wars, Indiana Jones and Batman.

My favourite so far is Lego Harry Potter (DS), although I play it on the DS and was sad that you couldn't do a multiplayer with other people, even if you both have the game. So I was hoping that Lego Star Wars III: The Clone Wars on the 3DS would put this right.

I've played through most of it now, and there doesn't seem to be a multiplayer mode. I am hoping one will unlock when you complete it, even though my dad says this isn't very likely.

It does look really good in 3D though. My brother plays it with the 3D turned off because his eyes are too young for it. He tries to watch when I play it in 3D - but I don't think he can see much really without being in front of the 3DS.

The most exciting parts are where you have two or three stories all happening at once.

Once he got over begging me to tell him the password for 3D mode, he seems to like playing it a lot. The most exciting parts are where you have two or three stories all happening at once and you have to switch between them to complete the level. It's really exciting.

On the Wii version you can get another player to help you with these different stories so you can do them at the same time. I think that is a better way to play. It's less confusing anyway.

The 3DS game does look a lot better that the DS though. Even with the 3D switched off, the graphics look more like the Wii or 360 version which I really like. Having a portable version of the game means I can play it on car trips or early in the morning before anyone else is up.

We do need to get a 3DS charger for the car though, if you can get those, because the battery ran out before we got to our grandparents, which I think is about three hours. My brother's DS was still going though, so it was alright because I could share his.

Lego Star Wars III: The Clone Wars isn't my favourite Lego videogame but it is a really good one.

I liked the 3DS Circle controller too, because it made it easier to get the Lego people to go in the right direction. It's also easier to switch between different Lego men by tapping on the touch screen, rather than having to flip through them all.

Lego Star Wars III: The Clone Wars isn't my favourite Lego videogame because the old Star Wars games let you play multiplayer, but it is a really good one. Even though I've not watched many of the cartoons I could follow what was going on. It made me want to watch them more, next time they are on.

You can support Ben by buying Lego Star Wars III: The Clone Wars