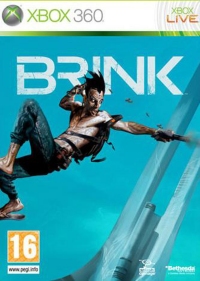 Other GamePeople columnists have reviewed this from their perspective - huh?:
Story Gamer (360)
Reporting Gamer (360)
Family Podcast (360) 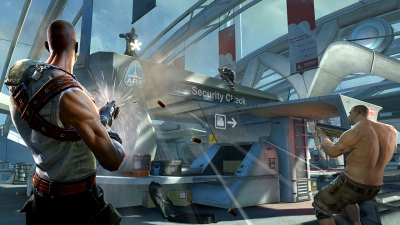 Brink is a pastiche of different games, but with a clear vision of what it means to bring these things together. It's a first person running game like Mirror's Edge, it melds single and multiplayer like Left 4 Dead and it brings pixel perfect PC shooting to a console audience like Team Fortress -- but somehow it isn't the car crash it could have been.

The success of Brink's whole comes largely from the brash swagger and style the game manages to conjure. It means that rather than the various technical elements, it's Brink's character and presentation that are front and centre. A visual style ties the experience together, while providing a clean aesthetic that enables the dense forest of cues and information to remain readable at all times.

As a multiplayer gamer this is good news. So often the arena based experiences that take the lion share of online gameplay are bereft of character. Single player campaigns usually get all the attention to detail and interesting plot twists while the multiplayer game is left to survive on the basis of its play mechanics alone.

That Brink sets this straight is no accident. It combines single player and multiplayer into one seamless experience. Rather than have two separate experiences, here you are never quite sure if you will be playing alone or against real opponents. Also, from a multiplayer perspective things are inherited from a singleplayer game -- objectives and missions are stronger and persist in all modes, and there is a greater sense of purpose that is not a million miles away from what was achieved by MAG (PS3).

It sounds like a big ask, but it is something that Brink seems more than capable of delivering. What results is fast paced gameplay that requires multiplayer tactics to succeed, but is at the same time shot through with a genuine sense of purpose and mission previously the reserve of single player campaigns.

Around this core innovation Brink pulls in successes from other games. Movement is one of the first things you will notice being a little different here. Mirror's Edge is obviously a big influence, here as there you often catch glimpses of your hands and limbs as you jump over obstacles. But more than just copying that style though, in Brink this creates a more fluid way to move around the environment that feels athletic and satisfying.

Then there is the objective system itself. When you start you get to choose from four different classes: Soldier, Medic, Engineers and Operative. Each class has different abilities each with their own advantages and disadvantages in the game. But more than this you can also opt to pursuit a side-mission while the rest of your team get on with the main objective. It's a clever move that accommodates a wider range of players than a typical multiplayer game -- and reminded me a little of the sort of tactics that emerge in Counter Strike.

Around this core innovation Brink pulls in successes from other games.

The whole game looks not a million miles away from the cartoon excess of Team Fortress 2. However this is a grittier world that resists a whole hog adoption of a Pixar look and feel. This leads into the characters which are each well realised with a distinct (if a little cartoony) appearance.

There are of course limitations to this melting pot of ideas. At times you can feel disconnected from the main action if you have opted for a side-quest. Also, the incentive for playing the game through these more alternative routes is not as high as the more traditional gameplay. I would have liked to see Splash Damage fragment the team more often and rewarded individuals who played key roles away from the main sites of battle.

The computer players are also a little uninventive at times as well. Having being spoilt for so many years by Halo's huge successes in creating enemies that would pass all but the most detail of Turing tests, Brink's AI feels a little dated -- maybe more artificial than intelligent.

The story is also as derivative as ever, and really amounts to an excuse rather than a reason to play. With the innovative blurring of gameplay modes this feels all the more like a missed opportunity to really leverage an unusual story. Again, I would have been interested in plot-driven incentives to play the game differently. If Brink's ambitious game mechanics could have been matched with a more unusual story that actually made sense of these intriguing fresh opportuniti8es in gameplay, it could have connected with a much broader audience.

It is refreshing to see some new ideas

As it stands though, Brink is still a special game, just one that has in its sights a relatively small group of people -- hardcore gamers. Of course that is in no way a bad thing if you are in this group.

As someone who has spent most of my recent years playing multiplayer games with friends, it is refreshing to see some new ideas being injected into the genre. Blurring the lines between single and multi-player action has been attempted by various studios of the year - with successes like Left 4 Dead and failures like The Crossing now part of the gaming cannon - but Brink represents a genuine next step and feels fresh to play.

You can support Sid by buying Brink