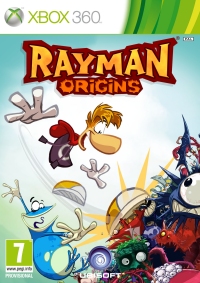 Other GamePeople columnists have reviewed this from their perspective - huh?:
Story Gamer (360)
Tech Gamer (3DS) 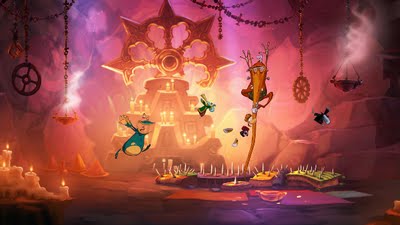 Rayman: Origins has been released on 360 and been provided for us to preview/review by the publisher.

"Rayman Origins 360 is a 2D platformer with such superb style and charm that even its old school difficulty feels palatable..."
- Story Gamer (Mon, 23 Jul 2012)

Rayman: Origins will keep classic game play of the original, but freshen it up with the inclusion of multiplayer and stunning 2D art.

The original Rayman released in 1995, it was a platformer that stuck to classic 2D paradigms despite the (then) recent trend in 3D. 16 years on and 2D is almost extinct with even the likes of Street Fighter and Sonic using polygonal models rather than sprites. Rayman: Origins promises to buck the 3D trend one more time and acts like the proliferation of the third dimension never happened.

Which is not to say that Rayman: Origins has stagnated. Quite the reverse in fact, it stands as the progression of videogames as they would be in a parallel 2D-only universe. The game looks stunning, filled with fluid animation that must require hundred of frames of animation. This is combined with an attention to detail in characters and environments that mark Rayman: Origins as a clear labour of love.

As well as visuals the multiplayer enables up to four players to play simultaneously in a variety of co-operative modes. It is a system seen in New Super Mario Bros (Wii), but here seems more involved with a greater variety of interactions and puzzles to solve.

The beauty of Rayman: Origins will be clear to any that view it, but for fans of 2D games it will offer a real treat.


You can support Paul by buying Rayman: Origins