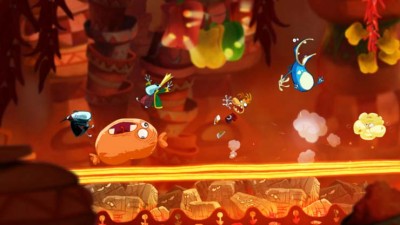 Rayman Origins comes to the 3DS, after a popular appearance on the big consoles. Will the attractive animation translate to the small screen with the big depth?

Rayman Origins was one of the most wonderfully presented titles of 2011. The cartoon style and detailed animation made the game feel like taking part in a TV cartoon at times, with plenty of visual humour, sidelong references to other games and slapstick injuries. In March, Rayman Origins comes to the 3DS.

The developers, Ubisoft, have a huge amount of experience in developing for the 3DS already. Amongst other games they have already released Rayman 3D and Rabbids 3D for the handheld and they are (in my opinion) the most credible third party developer for the Nintendo platforms. There's a good chance that they will make exemplary use of the console's 3D, as they did with the excellent Ghost Recon: Shadow Wars (3DS).

Also, the 3DS does have a much more impressive display resolution that the previous Nintendo DS. This has been proven recently in the charming Mighty Switch Force, which showed just how much character and detailed animation could be delivered by the handheld, all in 3D.

The gameplay style is very well suited to the 3DS, with side-scrolling action and bold characters.

The gameplay style is very well suited to the 3DS, with side-scrolling action and bold characters. With the 3D effect lifting the action off the background, the 3DS makes up with depth information what it loses in screen size. Plus the simple and short challenges make this an ideal game to play while out and about or travelling.

Perhaps the thorn in the side for the 3DS version is - as always - the multiplayer aspect. The competitive races with other players lift Rayman Origins to a level close to Super Smash Bros for mayhem among friends. The 3DS is at a natural disadvantage here, because each player requires a 3DS console and doesn't share the experience as closely with other players. If Rayman Origins takes a cue from many 3DS titles it may feature local multiplayer, but it is unlikely to feature a online match-up system. Nevertheless I can still hope!

As a single player game, though, it's still highly engaging. While the 3DS has been spoilt lately with Super Mario 3D Land, there aren't a huge amount of thoroughly entertaining and challenging platforming games on the console. The precise controls needed to beat each level combine with simple physical puzzles to test your mind as well as your fingers. Rayman Origins will provide some much needed breadth to the 3DS catalogue as well as being a standout title.

Perhaps the thorn in the side for the 3DS version is - as always - the multiplayer aspect.

It's a mixed bag, but personally I'm really looking forward to seeing Rayman Origin's smooth style and gaming humour come to the 3DS and I think there's an excellent chance it will be an outstanding title. It may not have the party appeal of the home console versions, but the prospect of being able to keep Rayman Origins handy for a quick cheeky round or two while being dragged around the shops may well make up for its shortcomings.

Rayman Origins is currently planned for release on the Nintendo 3DS on March 16th 2012.


You can support Simon by buying Rayman Origins