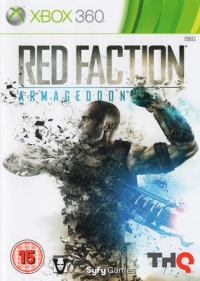 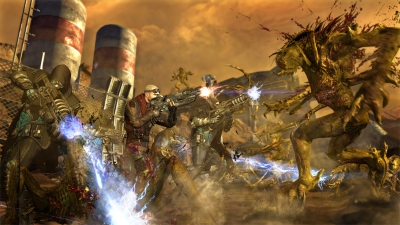 Red Faction Armageddon has been released on 360 and been provided for us to preview/review by the publisher.

"Red Faction Armageddon may not be a revolution, but if you want more destructible third person shooting it is still a lot of fun. Multiplayer also adds a new dimension to the falling masonry and crumbling architecture..."
- Teen Gamer (Fri, 22 Jul 2011)

Red Faction Armageddon expands the original's fully destructible world. New ways to cause architectural chaos and build political capital take us back to the caves of Mars.

When mankind finds itself poised on the brink of extinction Darius Mason can only watch as the surface of Mars is destroyed. But it's underground that the real enemy is discovered. Armageddon looks to wrap a more involving experience around Red Faction Guerrilla's central destroy-anything mechanic.

Red Faction showed how restrictive other adventure game environments were. It was magical to build and destroy massive structures to progress through the game. Armageddon offers new tools like the concussive blasts of the Nano Forge and the colony reconstruction of a new improved Geo-Mod 2.0.

You can support Paul by buying Red Faction Armageddon