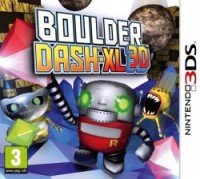 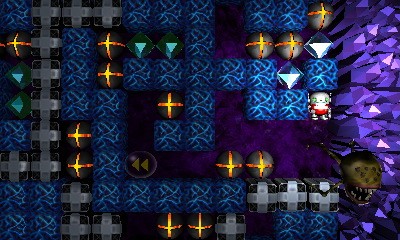 Boulder Dash XL 3D is a modern update to the 1984 classic, to be released at a budget price for the Nintendo 3DS.

Boulder Dash is one of those classic titles which it is always surprising hasn't been updated more often. The classic mix of puzzle gameplay, platforming and avoiding enemies was surely a precursor to more modern genres such as Shifting World (3DS) and Escape Plan (Vita).

Traditionally, Boulder Dash is a kind of high speed variation on turn-based puzzles, in which each move the hero, Rockford (or optionally heroine, Crystal, in this version) makes is followed by a corresponding move from the enemies and environment, as you break through walls and destroy supporting structures.

At first the screenshots don't give a clear impression of how the game will work in 3D, but it's worth remembering how effective Ghost Recon: Shadow Wars (3DS) is in its use of top-down 3D, providing some of the most effective visuals the 3DS has seen.

Boulder Dash XL 3D will offer a variety of game modes to add replay value and continued enjoyment to 150 new levels, across four different world styles. It will also provide some Streetpass features, unlocking new content and sharing scores with passers-by. The icing on the cake is that Boulder Dash XL 3D will also be released at a budget price point, with a retail price of only £19.99.

Boulder Dash XL 3D is currently planned for release on the Nintendo 3DS on the 20th July 2012.


You can support Paul by buying Boulder Dash XL 3D