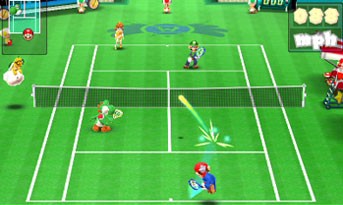 Mario Tennis 3D has been released on 3DS and been provided for us to preview/review by the publisher.

"With Mario Tennis we get the kids together to look at this great 3DS title and put it through its paces. The characters are a great hit with all our ages, especially memorable from recent outings such as Super Mario 3D Land. We also look at the multiplayer and how everybody gets on with playing against real opponents..."
- Family Gamer (Tue, 21 Aug 2012)

Mario Tennis Open will be the first proper 3DS version of the hugely popular Mario Tennis series. With this game, you will be able to enjoy multiplayer Tennis action with local and online multiplayer.

Thankfully Nintendo are beginning to appreciate the features which western gamers crave and Mario Tennis Open will be less of a lonely experience for those of us who rarely get to meet our gaming buddies offline. Mario Tennis Open will feature support for online matches, presumably for up to four players - any less would surely diminish the experience?

For those who do manage to meet up with gaming friends in the real world, there's also been a confirmation that Mario Tennis Open will support download play, whereby up to four 3DS owners can play together via local Wifi using only a single copy of the game. This is welcome news and a hugely convenient way to play with local friends as well as a shrewd way of demonstrating the game's charms to a wider audience.

It will be fascinating to see how Mario Tennis Open plays on the 3DS, since this is one major Mario title which somehow never made an appearance on the DS. Mario Tennis Open is rumoured to support additional touch controls for special moves such as Lobs and applying spin and should provide an entertaining variation on an already popular game.

Mario Tennis Open will be released on the Nintendo 3DS on the 25th May 2012.

Mario Tennis revives a much-loved Mario offshoot for the 3D handheld and hints at some interesting new features.

Of all sports-themed games in which Mario has starred, it is the classic Mario Tennis which commands the most affection from fans. Widely regarded as the finest Tennis game ever to be released for the Gameboy, with stellar appearances (from star develop Camelot) on the N64, GameCube and Gameboy Advance it is surely only the overriding popularity of Wii Sports Tennis that has kept this franchise from enjoying a reign on the Wii.

In many respects, had it not been for the Mii-focused design of Wii Sports, Wii Sports Tennis would have essentially have been Mario Tennis Wii. Nintendo have hinted that motion controls will form a part of the 3DS Mario Tennis experience. It will be interesting to see whether these controls can be implemented in a way which complements the game and supports the viewing of 3D with the same degree of success as Starfox 64 (3DS).

Mario Tennis was also one of only a handful of games released for Nintendo ill-fated Virtual Boy, their first attempt at a 3D console. It's easy to imagine how the 3D effect will add to the experience of playing Tennis as a video game and it remains to be seen whether the additional depth information makes the game more challenging.

Mario Tennis 3D also may provide up to four-player doubles matches, doubtless via wireless connection. Whether or not this game becomes an instant classic or a niche pursuit may be down to whether or not Nintendo offers download play (in which many 3DS owners can play together using a single game cartridge) and - more importantly - Internet multiplayer via Wi-Fi.

Mario Tennis is currently planned for release on the Nintendo 3DS in 2012.


You can support Paul by buying Mario Tennis 3D