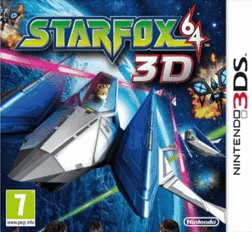 Other GamePeople columnists have reviewed this from their perspective - huh?:
Teen Gamer (3DS)
Reporting Gamer (3DS) 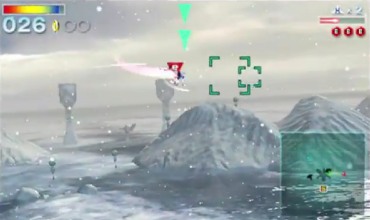 Starfox 64 3D places an epic space yarn in the palm of the hand, with tremendous replayability. The only drawback is a few bad Nintendo habits.

I found Starfox 64 3D's greatest appeal to be that it is akin to sitting down for a great sci-fi action movie. There are plenty of interesting characters, it has the jet-setting appeal of multiple and varied locations and the credits are rolling after a very satisfactory couple of hours.

That isn't to say that Starfox 64 3D is short. There's a great amount of content here, with multiple paths through the story and a pleasing amount of branching levels depending on the player's actions. But it's nice to feel that each play session can run the start to the end of the story. It's not an approach that would initially keep me as hooked as other longer titles, but it will keep me returning to the game for months to come.

The core gameplay is highly addictive. It delivers a real rush of head-on sci-fi space combat.

Exploring the story is more dynamic than in Starfox Command (DS), the other Starfox game of which I have the most experience. In that game the branching plot was more of a choose your own adventure story; at certain key points the player is presented with a menu choice of next steps. In Starfox 64 3D, branching options are provided based on events that occur - largely driven by the survival of Fox's wingmen.

I found my own feelings about this approach mixed. On the one hand I really appreciated the more procedural way a different story unfolded each time I played. This retained a sense of suspense for the narrative, in spite of the fact I had already seen the ending once. However, restricting my ability to choose a path based on performance means that there are some locales I wish to explore which I have not had the chance to get to, because a certain wing-man was knocked out. It was a factor which was not entirely in my hands, so I felt cheated.

There are a few control issues. Locking-on to an enemy can be frustrating as it tends to lock the nearest enemy. This frustrated me when team-mates were calling for Fox to shoot an enemy that was on their tail, as they were in the background and I couldn't get a lock on them. As a result, the team-mate ended up being shot down. The motion controls are nice but it took me a while to adjust to using them without destroying the 3D effect. It also revealed to me a great deal about how my body position changes during play as I constantly found my craft drifting off centre. Thankfully the game offers one-button re-calibration while flying which came to my rescue. All of these problems were at their worst during the ground vehicle levels.

The core gameplay is highly addictive. It delivers a real rush of head-on sci-fi space combat. There is such a dramatic onrush of enemies and route options that at times it feels more like a theme park ride, constantly providing cannon fodder through which to blast en route to the dramatic finale (although I confess I found the final boss a real chore after a while).

There's a great amount of content here, with multiple paths through the story and a pleasing amount of branching levels

The 3D is very good in this game during play, but I have to say I found the cutscenes to be disappointing. Given that these are predetermined shots it seems that the scene directors have not known how to make the best of the 3D. Scenes are often flat, or the objects too far in the distance to project any meaningful depth. My other bugbear with nearly all of Nintendo's 3D games is the use of text. It seems that whenever text is displayed it is nearly always displayed at screen depth (i.e. displayed in 2D). However when an object is presented as coming out of the screen, often text is displayed in the middle of the object. This creates a very confusing visual effect which always irritates me, especially during directed cut-scenes.

But overall this is a highly entertaining shoot-em-up with fun characters and wafer-thin plot, held together beautifully by a blockbuster-movie dynamic that keeps the action rolling on at a pace.

You can support Chris by buying Starfox 64 3D