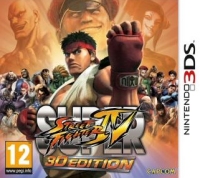 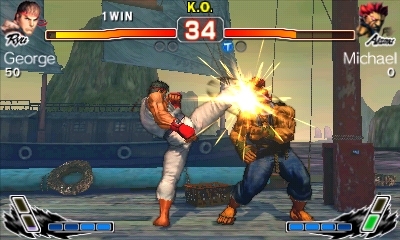 Street Fighter 4 has been released on 3DS and been provided for us to preview/review by the publisher.

"The 3DS, has been blessed with one of the greatest fighting games of all time, Super Street Fighter IV. The game leaps from the 2D sprite bashing fest it once was, into a lenticular 3D spectacular..."
- Tech Gamer (Sun, 01 May 2011)

With Super Street Fighter IV's release closing fast, attention turns from the 3D visuals to the gameplay. The 3DS version of the fighting game offers two gameplay additions (as well as 10 new characters).

A new 3D camera angle combines with the 3D display to help players judge frame counting and contact distances. This might in part be to compensate for the diminutive screen compared to a home console versions, but it also creates a new way to play Street Fighter IV that feels very different.

Then there are the new beginner buttons that provide access to super and ultra moves via the touch screen - as opposed to complex button combinations required by the console versions. Although this feature is primarily designed to lower the barrier to entry, it also opens up some very different play styles for more advanced players.

Configuring the touch screen pads to particular moves becomes almost a game in its own right. Mapping the pads to a special super or ultra move means these can be triggered in a single frame granting quick access to slower moves and substantially changing their effectiveness.

Alternatively the pads can be mapped to charge-up moves. This grants instant access to attacks that would normally need to be charged-up first. Again this changes the balance of power for characters that have powerful charge-up attacks, as well as rendering defunct the tactic of harassing opponents with lighter attacks to foil their charge.

Purists may balk as such substantial changes to the Super Street Fighter formula (and stick to the standard controls) but for those willing to embrace the changes this is a brand new way to play the game. This is something Capcom seem more than aware of as they have implemented limiting aspects to some use of the touch screen pads to avoid characters being over powered - primarily a time limit on how over certain moves can be triggered.

Add this to the online and local Multiplayer modes, Spectator mode, Figurine street pass mode and ability to share your game with a friend and Super Street Fighter IV 3DS is shaping up to be the definitive version - even if it doesn't have the latest changes from the Arcade Edition (watch out for Chun-li's leg loops).

Super Street Fighter 4 3D will to released on 25th March with the new 3DS system.

Having spent a day in the company of Super Street Fighter 4 I can start to get a feel for the finished product on the 3DS. Although not a game where visual depth is critical - the fighting still remains on a single plain - the 3D screen adds a real sense of weight and momentum to the combat.

The fixed angle of view makes Super Street Fighter 4 one of the easier 3DS games to focus in on. Unlike other titles with more ambitious use of 3D like Pro Evolution 2011 (3DS), playing this feels a lot less work for the eyes.

While the top screen looks after the brawling, the lower screen provides touch pads for special moves. This grants easy access for beginners before slowly turning it off as they learn the proper combinations themselves.

Super Street Fighter IV features all 25 characters from the console Super Street Fighter IV, along with 10 new ones - 35 in all (ed: nice maths skills there sir). Rather than cut down versions of the game that used to appear on portable consoles, this is being sold on the basis of matching the home version feature for feature. Add in 3D and the connectivity of StreetPass and SpotPass and in many ways this may outshine its big brothers on 360 and PS3.

The biggest challenge for the game is accommodating the three strengths of kick and punch on the 3DS buttons. With the 3DS button configuration not a million miles away from the PS3 and 360 control pads, this should just be a matter of player's muscle memory needing to re-learn positioning a little. You also have a choice between the Circle and D-pad for direction control, although again some re-learning will be required.

Super Street Fighter 4 is expected to be released on 3DS between 25th March and early June.

Street Fighter 4's presence is testament to the visual horsepower of the 3DS and is one of the more surprising titles on the 3DS line up.

As part of a push to engage third parties on the 3DS hardware from launch - Nintendo have done well to include the classic fighting game in their line up. While my kids don't play the console version I'm hoping the scaled down visuals on the 3DS game will make things more appropriate.

The screen shots show an obviously downgraded - but still impressive - rendering of the art style from the 360 and PS3 version. It will be interested to see if you have the choice of using the Analogue nub or D-pad for controls and how they handle left handed players.

The 3D nature of the display will add depth to the pseudo 3D rendering of the fights but is unlikely to impact on game play beyond this. It's also unlike that the 3DS's other interactive features will be made use of. Which although sounds like a negative comment is in fact testament to Capcom's faith in the visual horsepower of the 3DS - it being enough to carry the game on its own.

You can support Paul by buying Street Fighter 4