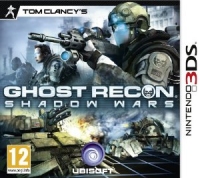 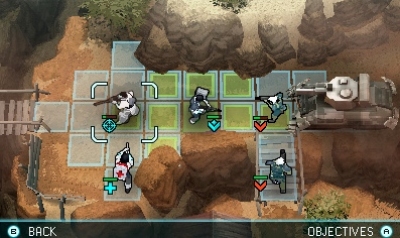 Tom Clancy's Ghost Recon Shadow Wars has been released on 3DS and been provided for us to preview/review by the publisher.

"Ghost Recon Shadow Wars is a turn-based strategy game I've wanted for some time. Although it lacks the creeping mystery of a Fog of War and the knife edge nervousness of Opportunity fire, by putting 3D to maximum use Shadow Wars still delivers an engrossing fiction in which to get consumed..."
- Story Gamer (Fri, 08 Apr 2011)

Tom Clancy's Ghost Recon Shadow Wars innovates with more than 3D on the new Nintendo handheld. A turn based play style does as much as 3D to single it out from the crowd with an experience that demands both high strategy and imagination.

Ghost Recon Shadow Wars is a game from a Julian Gollop led team that brings back tactical turn based strategy to the franchise. In a play style that has lost fashion since the days of Laser Squad and XCOM enemy unknown, Shadow Wars proves there is life in the old dog yet.

As the commander am elite special force your mission is to stop Russian ultranationalists (ed: that's a new one on me) from coming to power. This takes you from the deserts of Kazakhstan to the villages of Ukraine and the frozen lands of Siberia. Throughout you work to disable the secret Dead Hand bases and find resources to build, train, and equip your team, using increasingly high -tech weapons and armour.

This being a 3DS game it renders the action in impressive 3D. But the real novelty here is the turn based play style. This means that alongside a singleplayer campaign you can also setup multiplayer games on a single console. In a mode that reminded me of Laser Squad on the Amiga and Spectrum (and Advance Wars (DS) more recently) you simply pass it to the next player when it is their turn.

Balancing equipment, character abilities and opponents will be crucial here to deliver a viable game. My hope is that there is continuity between each mission where you can build ongoing experience and retain equipment from one level to the next. Time will tell.

Tom Clancy's Ghost Recon Shadow Wars is expected to be released between March 25th and early June on 3DS.