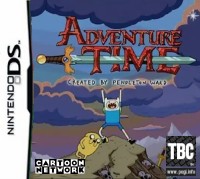 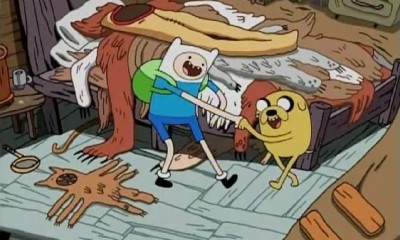 Adventure Time is set to jump from the TV screen to the DS with a new game announced by the series creator. With so much imagination in the series, personally I'm excited about the potential for the game.

The TV series of Adventure Time has proved a hit with audiences and critics alike and the recent news of a DS game in the works is exciting news. The game is to be developed by WayForward, who have made quite an impact recently with games such as Mighty Switch Force (3DS), Batman: The Brave and the Bold (Wii) and Aliens: Infestation (DS).

With so much videogame influence in the creation of the series, including a character who is a walking and talking games machine, the possibilities for how the show could inspire a game are huge. The series' creator is reputed to be a huge fan of Dungeons and Dragons and has said that with unlimited budget and technology, he'd love to create a massive roleplaying world to explore Adventure Time's universe. Certainly the show's hero is no stranger to accepting random quests at the drop of a hat.

Meanwhile, Wayforward's games are synonymous with arcade and retro gameplay and action, twinned with detailed storytelling and unique and expected features, so it could be that the Adventure Time game will be a more action-oriented affair with a twist. One of the show's main heroes can change shape into anything, so it would be interesting to see how this can be translated into compelling gameplay. Although, after their striking take on use of 3D with Mighty Switch Force (3DS), it's a pity this game is planned as a DS title, as I think the 3DS' more detailed display would do great justice to Adventure Time's signature animation style.

In any event, bringing this unique show and imaginative game developer together is an exciting collaboration, which I just hope rises to the quality of the source. Adventure Time deserves to be so much more than a simple scrolling beat-em-up or uninspiring platform game.

Adventure Time is currently in development for the Nintendo DS


You can support Paul by buying Adventure Time