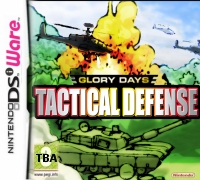 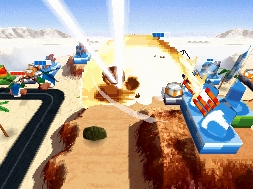 Glory Days Tactical Defense gets a US release date of 17th of January. But perhaps more exciting for fans of the previous games from Odenis Studio is the price tag. At just 200 Nintendo DSi points this looks like it may well be one of the cheapest real time strategy games on the handheld to date.

We are waiting confirmation of a UK release date, but understand the price-point to be universal.

Glory Days Tactical Defense brings halcyon 16-bit gameplay and forced-3D visuals back to life on the DSi. Its strategic real-time gameplay is carried off impressively with a graphical engine that answers all that is asked of it.

Play is set amongst howling sandstorms that subside to reveal waves of enemies on the horizon. It's essentially a real time strategy game where you use the lower screen on the DS to manage your resources and plan your attack, while the action is rendered in 3d on the top screen.

Although at first things look a little simplistic, upon further inspection you realise this is more like a 3D Advance Wars running in real time on the DSi. It also reminded me of the excellent forced-3D games Virus, Zarch, Conqueror and Zeewolf on the Amiga and Archimedes.

Odenis Studio's can impressively handle up to 300 units in real time - and without the framerate dropping. Add to that the 3D navigation and dynamic music and this is a DSi-ware game that looks to punch well above its weight.

The similarities to Advance Wars don't end with the visuals. Here too, each unit can be micro-managed. Each can be inspected, repaired and upgraded.

Although currently only one player, my hopes are high for a strong experience that warrants a local multiplayer version in the future.

Glory Days Tactical Defense is due for release soon on DSi-ware. In the meantime you can see it in action in this Video.

You can support Paul by buying Glory Days Tactial Defense