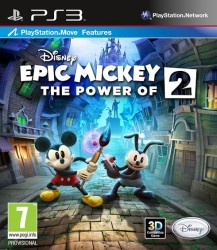 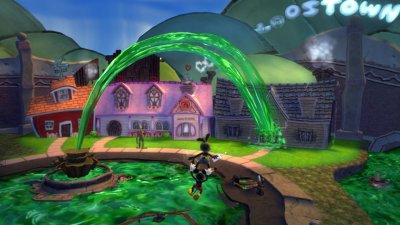 Epic Mickey: The Power of 2 has been released on PS3 Move and been provided for us to preview/review by the publisher.

"Epic Mickey: The Power of 2 is a sequel to 2010's Epic Mickey, this time for all major consoles. In this episode, we talk to the Studio Director, Paul Weaver, to find out how the new game became shaped the way it is..."
- Family Gamer (Fri, 07 Dec 2012)

Epic Mickey: The Power of 2 is a sequel to the Wii exclusive Epic Mickey, only this time it is coming to Playstation Move and Xbox 360 and adds two players. With a year's hindsight, hopefully this game will correct the mistakes of the past.

Epic Mickey: The Power of 2 sees a return to the vibrant and exciting world of Epic Mickey, in which the cartoon characters are given the power of magic ink to shape reality, create and erase objects and complete incredible adventures.

I found Epic Mickey (Wii) to be appalling, in spite of its incredible design and rich plundering of Disney's history. I wasn't alone and despite the the first game's financial success it was justifiably lambasted for its flawed platforming controls and a game camera which made it almost impossible to play.

However, Epic Mickey: The Power of 2 will go much further by adding local co-op play in which the second player joins as the mischievous Oswald, the star of the silent era before Mickey Mouse usurped his fame. As well as this, all of the classic Disney characters will be brought to live will full voice acting as opposed to the first game's mime show.

It's very promising and together with the exciting announcement of Epic Mickey: Power of Illusion (3DS) - an Epic Mickey-branded 3D sequel to the Megadrive platform classic Castle of Illusion - it looks as though Mickey Mouse may finally get the tribute he deserves.

Epic Mickey: The Power of 2 is currently planned for release on PS3 Move, Xbox 360. Nintendo Wii, Windows PC and Mac on September 26th 2012.


You can support Paul by buying Epic Mickey: The Power of 2