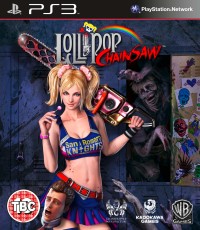 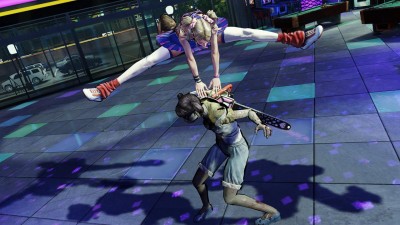 Lollipop Chainsaw has been released on PS3 and been provided for us to preview/review by the publisher.

"Lollipop Chainsaw has Grasshopper Manufacture once again forcing an America shaped peg through a Japan shaped whole. A zombie hack-um-up it has surprising depth, though at times it can be hard to find it. .."
- Scared Gamer (Sun, 12 Aug 2012)

Lollipop Chainsaw looks to be a game which takes everything to extremes. The main heroine is a hyper-sexualised lollipop-sucking Cheerleader with a tiny figure and an even tinier outfit, speaking with the kind of whining high-school drawl made popular by Californian teen dramas. Furthermore her quest is to kill as many zombies as possible with her weapon of choice: the chainsaw. All the while she carries the conscious (and chatty) severed head of her boyfriend whom she decapitated herself in order to save him from zombie infection.

Juliet, Lollipop Chainsaw's heroine, combines cheerleading moves, chainsaw wielding and even some combos that allow her to use the boyfriend's head as a projectile weapon. From what I've seen, it looks as though it will even be possible to find occasional bodies for the head to take over, in order to make progress.

Lollipop Chainsaw revels in excessive black humour combined with slapstick violence and it's probably fair to say that it won't be to everybody's taste. From the same studio that created No More Heroes, it's clear that the developers aren't afraid to put forward game characters who tread a fine line between entertaining and alienating their audience, but do so with tremendous skill.

If the gameplay is as slick and addictive as the studio's previous titles then it's sure to become a cult hit, packed with clever references for keen eyes to spot amid the Buffy-style gymnastic violence. Amid a number of rather po-faced zombie actions games of late, Juliet could be a refreshing anti-heroine for an eager audience.

Lollipop Chainsaw is currently planned for release on the Playstation 3, Xbox 360 and Windows PC on the 15th June 2012.


You can support Paul by buying Lollipop Chainsaw