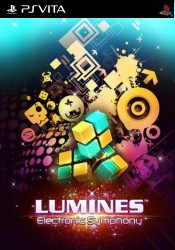 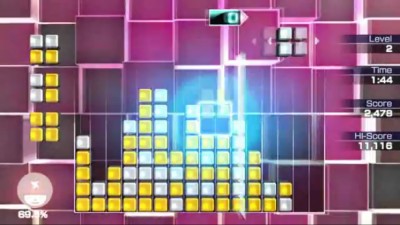 Lumines: Electronic Symphony marks a return to the handheld classic with a pounding electronic soundtrack and a variety of game modes on Vita.

It's interesting how Sony are turning to classic PSP games to make an impact in the Vita's launch lineup. Lumines: Electronic Symphony joins Wipeout, Everybody's Golf, Ridge Racer and Dynasty Warriors in retreading the spread of titles which defined the original PSP's early lineup.

With Lumines, this is certainly no bad thing. The original's block-matching action and enthralling soundtrack made it an instant hit and is still regarded as a classic. Despite falling on hard times in recent years the PSP made a good impact with its early titles. For me I'd like to see a return to the turn-based action of Metal Gear Ac!d.

In this new version, there will be four different games modes called Journey, Duel, Stopwatch and Masters. No details are currently available about how these will actually play, but Duel suggests that a multiplayer mode similar to Tetris' duel may be among the features.

Also tightly under wraps is the actual play-list, with the only hints being the inclusion of The Chemical Brothers and Kaskade. However with a focus on a DJ-produced set-list and catchy Electronica, it's sure to be a fantastic musical journey.

Lumines Electronic Symphony is due for release on the Playstation Vita on the 22nd February 2012.


You can support Paul by buying Lumines: Electronic Symphony