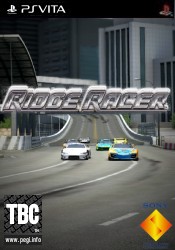 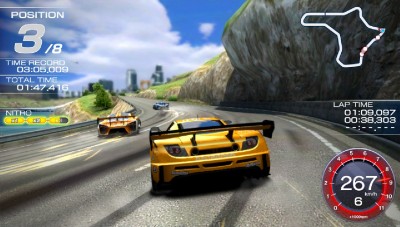 Ridge Racer definitely looks the part on the Vita, but is in danger of disappointing players by offering only a tiny amount of content. Early reports are indicating that the retail version of Ridge Racer, boxed and download, will come with only three courses and five cars.

If this is true then unsuspecting fans are sure to be disappointed when they get their hands on the racer. The tracks can be played in normal and reverse modes, but even at that stretch of the imagination, six tracks is not very much content. Pilotwings (3DS) offered far more by comparison and was largely criticised for being lacking in depth. In contrast, the highly entertaining GTI Club+ on PSN offers three distinct courses around a city with five cars for about £8.

There are suggestions that the game will be bolstered with downloadable content for some time after release. However, after paying £35 for the game, would you really want to pay an additional fee for new tracks, which appear to be listed for ¥400 each (about £3.50)? With such strong-looking competition in the Vita launch range from Motorstorm RC and Unit 13, it's hard to see this game making an impact.

It would be a pity if Ridge Racer suffers for this on the Vita, as the Ridge Racer series offers some great fun arcade racing, usually on a series of highly imaginative courses. To date Ridge Racer 3D (3DS) has been among my favourite portable titles on the 3DS, a version which features a much wider range of vehicles and tracks.

To be totally fair, there is a little way to go before Ridge Racer is released for the Playstation Vita and there is always the possibility that plans will change, especially given the widespread negative reaction to this news. As things stand, this game doesn't appear to be the fairest deal for cash-strapped consumers at the present time.

Ridge Racer is currently planned as a launch title for the Playstation Vita on the 22nd February 2012.


You can support Paul by buying Ridge Racer