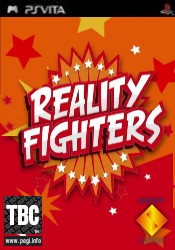 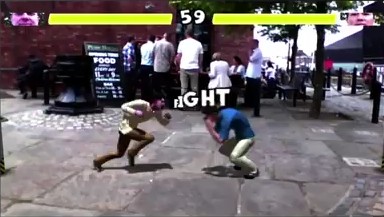 Reality Fighters combines AR thrills with personalised street fighting, making anywhere in the world a potential game level. It also shows how much the technology has moved on.

When I first saw Reality Fighters I thought it was just attempting to cash in on the popular success of the 3DS' AR features, such as face capture and superimposure. However, on closer inspection Reality Fighters is actually a far more impressive achievement.

Anyone who has played an AR game will know the limitations: The little reference card has to be placed somewhere well lit and the cohesion of the objects to the real world can be fiddly. Also the need for the card itself seems to limit the distance and scale at which the console can be used. However, from what we've seen of Reality Fighters much of these early attempts may be swept away by an AR game which can utilise an environment without the need for a reference card.

The game is a two-player fighter in the manner of Street Fighter, only here players are mapped into the real world environment visible to the Playstation Vita's rear camera. How effectively this is remains to be seen. It does appear to work well from a variety of angles and over unusual surfaces, such as grass.

In gaming terms, this means that the number of available arenas is limited only by locations around you with a flat surface and possibly the weather. I don't think I'd fancy the snowstorm or volcano-themed level in this game!

Reality Fighters also promises a much-improved take on facial capture. Here, the mapping of a player's face onto an avatar for martial arts combat is a great-looking effect with truly individual results.

Being a fighting game, of course, the most important thing is how well it plays and how well it allows for matches with other gamers. For that, we'll have to wait and see but at the moment this looks like a highly entertaining diversion from the well-beaten track.

Reality Fighters is currently planned as a launch title for the Playstation Vita on the 22nd February 2012.


You can support Paul by buying Reality Fighters