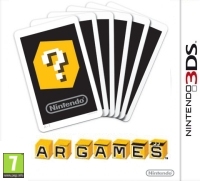 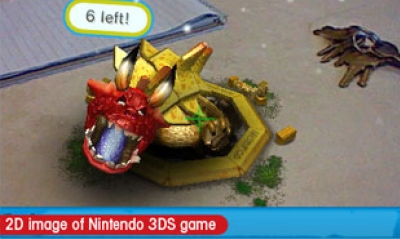 AR Games offer more than proof of concept, and in many ways outshone the titular 3D screen we had heard so much about.

Although the main message of the 3DS is the 3D display (ed: the clue is in the name) for my family a much more exciting experience were the augmented reality games. Two come pre-installed on the 3DS system, Face Raiders and A.R. Games.

Unlike the 3D focused experiences that exclude any child with developing eyes (roughly six or younger) the augmented reality games can be played by anyone and are just as magical.

You may have seen some of this before as both EyePet (PS3/PSP) and Invizimals (PSP) use a similar approach. The basic concept is that the game uses the space you are physically sitting in as the play field. You see your environment appear on the screen via the camera and then the game projects playthings into that space that can be interacted by just your (virtual) touch.

For kids it is simply magical. Ours (3, 5 and 7) spent hours grooming, feeding and playing with their EyePet, even though it required a very well lit room and a lot of patience to setup.

The 3DS version of this is typically Nintendo - very simply and very addictive. The console comes with a series of AR Cards which are placed on any surface and then viewed via the 3DS cameras. At this point the magic happens. In a slightly similar way to EyeToy and Kinect's ability to view a three dimensional world, the two lenses on the 3DS case provide an oriented view of the player's surroundings.

When the card is placed in front of it different games (quite literally) pop-up out of the table -- or in some cases holes appear that have to be peered into. Although the kids had seen this before, being able to manoeuvre around the different targets by viewing the card from a different angle seemed to create a really strong connection between them and the virtual world.

Playing it myself, there was a nice simplicity compared to other similar games. This was in part because the camera was on the system rather than pointing at me, but also due to the 3DS's accelerometers capturing the exact angle I was viewing from.

Each game progresses through a series of levels that can be played over for a better score or quicker time. We spent our afternoon playing the game where you have to shoot various monsters that emerge from a box on the table, but there are a whole range of other challenges to try.

AR Shot is a combination of miniature golf and billiards. You move the 3DS as if it was the cue to hit a ball around a course. This means you can not only view each course by moving the 3DS around but also have a lot of control of the angle and direction of each shot. There is an additional set of courses available in the AR Games shop for this.

Fishing is a cross between Wii-Play and Animal Crossing fishing, but played on your kitchen table rather than on the screen. My kids loved the idea of being able to pull various fishes right out from the table by simply lowering and raising their rod into the water.

There is a Fish Catalogue that can be bought from the AR Games shop that provides a list of the fish you have already caught. Again like Animal Crossing, this lists the times of day and colours that particular fish are attracted to. You have to play the game at those times, and on a surface of those colours for them to appear.

GraffitiA 3D is a drawing game where you can use different brushes, pens and other equipment to create pictures. Your creations can then be adjusted by pressing different buttons on the 3DS.

Globe is a 3D globe like the one in the Wii's weather channel. You can shoot at it to turn it round and change the magnification. It also highlights where you are in the world with an arrow.

Photo shoot uses the different character cards (Mario, Link, Kirby, Samus Aran and Pikmin) that come in the AR Games pack. Placing one of these in front of the camera makes the character on the card appear in 3D, along with a little theme tune. You can then pose, position and change the expressions of each character before taking a picture. In addition to the Nintendo characters you can also include a selection of Mii's.

It's 3DS features like these that are actually much more exciting for family gamers.

The range of games on offer is quite impressive. But what will be more interesting is how these AR Game concepts can be worked into fully fledged videogame experiences. My kids are also itching for some multiplayer versions of these games - which with Nintendo's ability to offer download upgrades to their system may not be out of the question.

Although the 3D screen will draw the most headlines, it's 3DS features like these that are actually much more exciting for family gamers.

You can support Andy by buying Augmented Reality (AR) Games