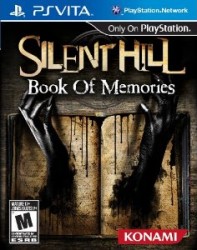 Silent Hill: Book of Memories is a huge departure from the long-establish survival horror series, abandoning the claustrophobic over the shoulder camera for a more Vita-friendly top-down look with twin-stick shooter antics.

It was a reveal that was sure to raise the ire of long-standing fans of the Silent Hill series, as Silent Hill: Book of Memories demonstrated the new look for the game. A top-viewed twin-stick dungeon crawler, more akin to Dungeon Hunter: Alliance (Vita) or Diablo III (PC), the focus here is on co-operative multiplayer action rather than psychological horror.

In a first for the series, you will be able to completely create your own identity by customising an avatar to control in the game, as you would with an online roleplaying game or Mii. The game also features the Book of Memories itself. This is a narrative series of events which have happened in your character's (and the other players with whom you connect) past which have an impact on the game world. You will be able to alter the contents of this book to change history and modify the world and events around you and the other players.

Exactly how Silent Hill: Book of Memories will be achieving this mechanic is still unclear, but it's an interesting prospect and the latest screens indicate that there is still room for creeping horror in a top-down view.

Many gamers have already disregarded Silent Hill: Book of Memories out of disappointment over the change in genre, but it's worth remembering how successfully Tomb Raider made the leap to a top-down co-operative adventure so successfully in Lara Croft and the Guardian of Light (360). That too earned a frosty reception from the gaming faithful, but turned out to be one of the series' most interesting and enjoyable adventures. Don't write off the Book of Memories too quickly.

Silent Hill: Book of Memories is currently planned for release on the Playstation Vita in mid 2012.


You can support Paul by buying Silent Hill: Book of Memories