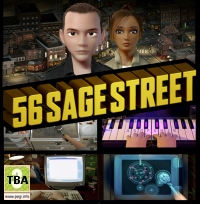 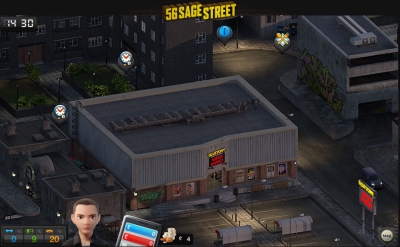 56 Sage Street has been released on Web Site and been provided for us to preview/review by the publisher.

56 Sage Street's endearing point and click world is still good fun, but now you can win real world prizes as you play.

Having enjoyed 56 Sage Street (Web) earlier in the year, we were interested to see there is now another reason to play in the form of a LG 42LE4900 42" television.

From 22nd December 2010 all you have to do is find the hidden object in the game and unlock a secret mini-game. Complete the mini-game to enter a prize draw and get a chance at the TV. Other prizes include a LG Home cinema system, five Apple iPod 8GB Nanos and four Nintendo Wiis.

56 Sage Street is a web game I heard about when some friends were playing it. It's a point and click adventure with a strategic edge. It all starts with a nice 56 Sage Street Introduction video.

Because you can play the game in any web browser there's nothing to download and install. This means you can play the free game anywhere, anywhere I could use the Internet anyway. This meant I could drop in for a go at lunchtime in the computer lab at school as well as passing time visiting my grandparents. You login with Facebook and can also share achievements with your friends via this account or Twitter. In fact my mates have started something of a race to be first to get the full set of trophies.

Although 56 Sage Street is provided by Barclays bank, and has their branding running through it, it's never heavy handed in its advice - although you are encouraged to save money in your bank account - and the focus seems to be on an enjoyable game rather than encouraging players to shop and save.


You can support Paul by buying 56 Sage Street

eBuzzing wrote this Reporting Gamer article under the watchful eye of Paul Govan.