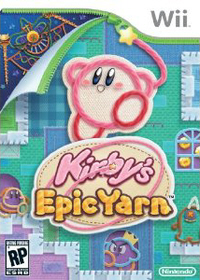 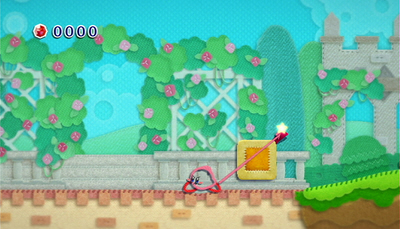 Kirby's Epic Yarn has been released on Nintendo Wii and been provided for us to preview/review by the publisher.

"A Pitch Too Far, a review in the form of a short story. This week, a marketing manager finds he has to deal with a strange figure on the ledge outside his office, intent on jumping. What could possibly be troubling him so greatly?.."
- Novel Gamer (Mon, 13 Jun 2011)

"Kirby's Epic Yarn provides an fun and varied platformer with some addictive bit-sized gameplay despite a fabric-based premise which may put off more serious gamers..."
- Tech Gamer (Sat, 04 Jun 2011)

"Kirby's Epic Yarn Wii isn't just a reinvention but new gaming paradigm. Courage of his convictions makes this experience as fresh and enjoyable as when Kirby first stepped onto our screens in 1992..."
- Family Gamer (Wed, 23 Feb 2011)

Kirby's Epic Yarn drops special powers in favour of tactile interactions with its exquisitely patchwork 2D levels. Endearing to a tee, Europe wait until 2011 as the Stateside reviews roll in.

Kirby is one of Nintendo's most loved, but most under-utilised characters and this is the first Kirby game on a console since the Gamecube's Kirby Air Ride in 2004.

Kirby is a pink ball from the planet pop star and ever since his first appearance in Kirby's Dream Land he has had some unusual abilities. Most noticeable amongst these is his ability to devour his enemies and then copy their abilities. But for this latest 2D adventure set within a world made of fabric and wool, most of those powers are gone. In their stead are a myriad of ways to interact with this most material of worlds.

The feel of pulling the zippers and yanking buttons quite literally altering the fabric of the world was inescapably compelling. It's also great climbing in behind the fabric - leaving Kirby as a little bulge beneath the blanket. (ed: cute!)

Kirby's Epic Yarn lets you also play cooperatively like New Super Mario Bros Wii, although you can't grief your pals by knocking them off ledges. Here, it's all about working together to beat the bosses and get a high score.

It looks like Nintendo have another solid gold platformer on their hands and its already been gathering impressive reviews in North America where its already available.

You can support Paul by buying Kirby's Epic Yarn