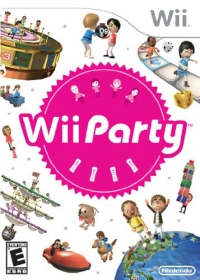 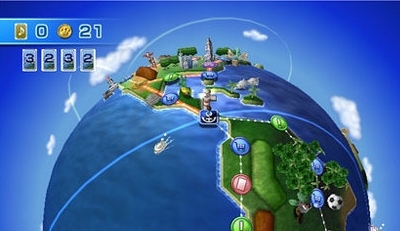 Wii-Party has been released on Nintendo Wii and been provided for us to preview/review by the publisher.

"Wii-Party offers more variety than a board game can. Although the pressure of time limits and reactions is sometimes too much tension for the kids, the grownups in our family can't stop playing it..."
- Board Gamer (Sat, 21 May 2011)

"Wii-Party revels in its miniature form as it miraculously transforms Nintendo's curtailed casual gaming into something intentional and jubilant..."
- Teen Gamer (Fri, 12 Nov 2010)

"Wii-Party tested my girl gamer skills in unexpected ways. Varied minigames wrapped up in unusual collections make this worthwhile for me or my dad..."
- Eclectic Gamer (Wed, 27 Oct 2010)

"Wii-Party missed the multiplayer mark with too much luck and not enough fun. Some interesting ideas thread through the various modes, but never amount to enough for an enjoyable multiplayer family experience..."
- Multiplayer Gamer (Thu, 14 Oct 2010)

"Wii-Party's personalised board games and pinpoint minigames hooked me in to give it a go. But what I wasn't expecting was such a well though through game for all the family. Well considered game play with really clever use of the Wii for mums and families..."
- Domestic Gamer (Thu, 30 Sep 2010)

"Wii-Party is an instant classic. Hand tailored minigames coalesce around board games and challenges that are as exquisite as they are playful. But more than this, it's the family pleasing design tweaks that really make this sing..."
- Family Gamer (Thu, 23 Sep 2010)

Wii-Party ups the physical challenge with games that use the Wii-mote in unusual ways.

We have learnt that the game, like Wii-Play, will come with Wii-mote to get you in the multiplayer mood for the 80 mini-games and 13 modes.

House Party still sounds like the most unusual aspect of game play, as it takes the action away from the television and turns your living room into a pivotal part of the experience. This includes:

Hide 'n Hunt: One player hides the Wii-motes in the room. The others are invited back to race to find them from the sounds made by the Wii-mote speakers.

Animal Tracker: Players listen for the animal sounds coming out of the Wii-motes and grab the one matching the picture.

Time Bomb: Players pretend the Wii-mote is a bomb and must pass it around without shaking it.

Word Bomb: Each player has up to 10 seconds to say a word from a given category. If the player doesn't say a relevant word and press the A Button in time, then the bomb explodes and it will be game over.

Buddy Quiz: One player chooses to be the 'Buddy' and then has to answer questions. The rest of the players then have to predict how many they will answer.

More traditional console based Party Games include Board Game Island, Globe Trot, Bingo, Swap Meet and Spin Off. These are complemented by team games that include Balance Boat, Friend Connection and Match-Up.

Wii-party is due for release in the UK on October 8th and in the US on October 3rd.

Wii-party brings minigames into the real world with its novel uses for the Wii-mote. Whether playing virtual hide and seek, pick-up sticks or grab the farm animal it is good to see innovation is still strong for the next Wii first party release.

Wii-party bridges the gap between board games and video games with 13 activities where players have to interact with the real world to win. Like holding the Wii-mote to your ear in Red Steel to hear the whispered mission, it all sounds a little silly but will probably work really well.

Lay four controllers on the table for instance and grab the one that makes the noise matching the animal on the screen. Or one player leaves the room while the others hide the controllers so they have to find them in the time limit.

As well as these after dinner games there are 70 Mii infested minigames to play. These are more traditional multiplayer experiences like playing tag, shooting and collecting.

After topping the charts in Japan since its July 8th release, Wii-party is due for release in the UK on October 8th and in the US on October 3rd.

You can support Paul by buying Wii-Party