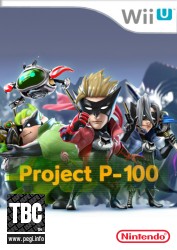 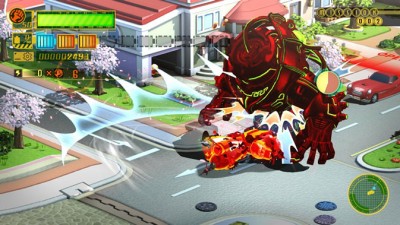 Project P-100 is a realtime action game featuring a group of superheroes marshalling the citizens of a town to destroy enemies, using hordes of volunteers to transform into gliders, giant fists and stepladders.

Project P-100 (working title) appears to share a great deal of similarities with Pikmin 3 (Wii U). You take control of a hero or two and recruit a crowd of civilians who follow you around. When confronted by puzzles or enemies, your group can transform into a variety of shapes to win through.

Visually striking, it looks like a balance between the bendy superhero animation of The Incredibles, with the pop-verve of Viewtiful Joe mixed with the quirky urban insanity of Touch My Katamari. The micro-sized heroes look like a perfect counterpoint to the giant comedy fist which pounds enemies and moves scenery around.

It's odd that among Wii U's sparse original launch titles there are two games, this and Pikmin, that seem to share so much gameplay in common. Hopefully these two titles will have enough distinctiveness to set them apart otherwise they may be in danger of splitting their audiences. Admittedly this game seems designed specifically for the Wii U gamepad, while Pikmin will be offering a classic control scheme but at this stage they do appear quite similar.

I'm hoping that Project P-100 can implement the internet multiplayer of which Pikmin 3 (Wii U) will so surely feel the lack. Given that the early footage shows multiple players on-screen and it has previously been reported that the Wii U will only support one tablet controller, this seems very hopeful, unless this too offers a Wiimote control method.

Project P-100 is planned for release on the Nintendo Wii U around the time of launch at the end of 2012.


You can support Paul by buying Project P-100